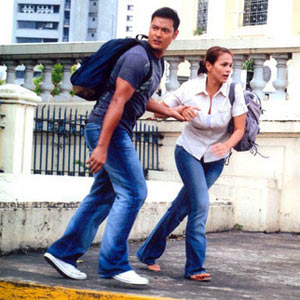 In the indie film Dukot, Allen Dizon and Iza Calzado give life to two activists who become human rights victims. This film will have its run in Philippine cinemas starting December 2, 2009.

When the writ of habeas corpus (or the right of a person to undergo the due process of the law prior to incarceration) was suspended during the martial law, individuals who gained the ire of the government mysteriously vanished.


Four presidents after, the stench that reeked out of the dictatorial administration still lingers today. A number of leftists and critics of the government have been deprived of their liberty through forced disappearances. This is the weighty social reality depicted in Joel Lamangan's Dukot (Desaparecidos).


The story begins with Junix Etrata (Allen Dizon) and his girlfriend Maricel Salvacruz (Iza Calzado) being abducted by military intelligence agents. Junix is a student activist who decided to dedicate all of his time to the movement. He takes refuge in the mountains to live with the indigenous people. Maricel, on the other hand, left the movement to lead a normal life. Their captors identified them as leaders of the New People's Army (NPA). In order to extract information from them, they were subjected to inhumane torture and despicable harassment. Junix was burned by cigarettes, tied down on a wooden plank and given electric shock, and his head was dunked into a huge drum of water.

One scene even reminds us of Star Cinema's Dekada '70 (the one where Piolo Pascual was seated on top of a block of ice naked) while others conjured up images of the Hollywood film Rendition. Call it shock cinema if you may, but this is reality.


Meanwhile, the parents of Junix and Maricel seek the help of a human rights group to look for their missing children. It's a depressing predicament for a parent to dig graves, look at dismembered body parts, and identify corpses in morgues but they remain hopeful that their children are alive and will soon be found.


This alarming slice-of-life is juxtaposed with an emotional element that made the film more powerful. The film tends to overdo some of its dramatic scenes with slow motion, unnatural dialogue (Can you imagine a guy shouting "Mahal kita... habambuhay!" in the middle of Taft Avenue?), and an overbearing score. The drama could be a little tighter.

Luckily, the cast is competent enough to play their roles with conviction. Iza is perfect for her role. Tabloid reporters will make a fuss about her ‘daring' rape scene but her performance is definitely more than that. Allen subjected himself to the torture scenes that were shot for two straight days. In the face of such brutality, his character is able to stomach it all but he breaks down when he comes face-to-face with his girlfriend. The actor-producer is able to infuse tenderness to his tough guy exterior.

Gina Alajar, who played Maricel's mother, doesn't need to prove anything. Through her role as a suffering mother crying out for justice, she reminds us how good an actress she is. Her mannerisms and delivery of lines is in character 100% of the time.

With the barrage of sensationalized news headlines that come with our morning coffee, we can't be blamed for becoming apathetic to the country's social condition. Sometimes, it gets hard to separate the truth from yellow journalism. But after watching Dukot, it would be damning not to care.

Penned by Palanca awardee Bonifacio Ilagan (who also wrote The Flor Contemplacion Story), this film is an account of the stories of real life desaparecidos (literally the disappeared ones). Bonifacio, who is a political detainee himself, produces a timely and courageous political thriller as a protest against forced disappearances and human rights violations in the Philippines.

Dukot (Desaparecidos) is a difficult film to watch but what makes it even more difficult to accept is the fact that these inhuman acts are still happening in society.

This indie film, directed by Joel Lamangan (who used to be a political prisoner himself), will have its regular run in the Philippines starting December 2, 2009. It will be screened in time for Human Rights Month celebration in the country.