Amy Adams blogs her way to happiness in Julie & Julia 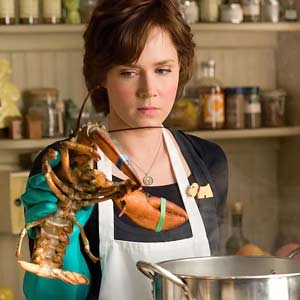 Amy Adams (in photo) portrays Julie Powell in the upcoming film Julie & Julia. This young woman challenged herself to cook all 524 recipes in Julia Child's book Mastering the Art of French Cooking and document it in her blog launched in 2002.

In 2002, Julie Powell took on a year-long culinary quest: cook all 524 recipes in Julia Child's book Mastering the Art of French Cooking. She chronicled her trials and tribulations in a blog that caught on with the food crowd. Now, her kitchen adventure is brought to the screen in Columbia Pictures' comedy Julie & Julia with no less than Oscar-nominee Amy Adams (Doubt, Enchanted) playing the character.

Director Nora Ephron wanted an actress who could embody a young woman's insecurities and emotional blow-ups. She knew Adams was up to the task, but she also met another major requirement for the writer/director.

"Among the many things I liked about her was that I believed that she was smart enough to be a writer," says Ephron. "And she's funny."

Adams found plenty in the character of Julie Powell that spoke to her. "It's right after 9/11, she's turning thirty, and she's confused in her life," Adams explains. "She's really come to a crossroads, and she's trying to make decisions. That was something I was very familiar with, and I don't think it's reflected very often in films in an honest way. For a more modern woman, there are some very all-encompassing questions, and I thought this character really embodied that journey and that confusion."

New Yorker Julie Powell was nearing 30, dissatisfied as a writer, and facing an emotionally depleting day job working for an organization devoted to rebuilding the World Trade Center site after 9/11 and helping displaced residents resettle. Spurred to change her life, she decided to cook her way through Julia Child's masterpiece—524 recipes in 365 days—and chronicle her efforts in a blog. With the encouragement of her husband Eric—who was happy to devour the fruits of her labors—Julie began detailing the ups and downs of her time-consuming project.

Today, blogging is part of the fabric of our lives, but in 2002, Powell was a blogging pioneer. Producer Laurence Mark says, "I think at the outset of this endeavor, Julie may not have realized just how ambitious it actually was. But since she was clearly getting a kick out of it, and the results were so delicious, it all became somewhat more manageable."

Powell's writings became so popular that, like Child, she got her own culinary adventure published: Julie & Julia: My Year of Cooking Dangerously was released by Little, Brown in 2005. But before Powell even had a book deal, producer Eric Steel had taken notice of her, including in a New York Times profile written by food writer Amanda Hesser. "Julie was really one of the first bloggers to sort of break out of the tiny orbit that some of these people live in," Steel explains. "She had a real audience. By the time I found her, she had thousands of people reading her blog every day."

"When I started, I never expected that I'd have a book, or that book would be optioned, or that Nora Ephron would become attached to write and direct the movie, or that Meryl Streep and Amy Adams would be in it," says Julie Powell. "They've made a beautiful movie, a movie about marriage, and being brave, and creating yourself. This has all been an amazing experience."