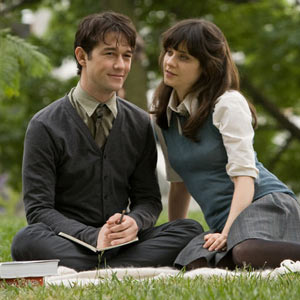 In 500 Days of Summer, Joseph Gordon-Levitt plays Tom, a greeting-card copywriter, while Zooey Deschanel is cast as Summer, his temporary officemate.

The offbeat romantic comedy 500 Days of Summer stars Joseph Gordon-Levitt and Zooey Deschanel in a love story seen straight from the love-addled, mood-clouded mind of Tom Hansen (Gordon-Levitt). This postmodern love story was one of the entries in the 2009 Sundance Film Festival held earlier this year.


Tom, a would-be architect who works as a writer of pithy romantic sayings for others yet can't seem to communicate the overpowering depth of his own feelings to the only woman who matters to him: the elusive Summer (Deschanel).


Set within the scenic parts of downtown L.A., Levitt shares his 500 Days of Summer in the following Q&A:


Q: How would you describe the plot of the film?

A: "I liked that the story was written by two guys and is directed by a guy and they were all completely unapologetic about the idea that this story is from our perspective, it doesn't pretend to be an objective point of view. The entire story is completely subjective from Tom's internal experience and it illuminates his experience of love. Love isn't rational or logical or linear—and the film completely reflects that."


Q: What is it in Tom's character that got you involved in the film?

A: "I think Tom always thought love was like what he saw in the movies or heard in pop songs. He has a lot of preconceived notions of what love should be, instead of really living in the present tense and paying attention to what's actually happening between him and Summer...which he only sees later."


Q: Have you been heartbroken before?

A: "I've had my heart broken before, truly, truly, truly broken. But when I look back at me in my broken-hearted phase it's pretty hilarious, because it feels so much more extreme than it really is."


Q: What is it in the movie that the audience can look forward to?

A: "One of the things I love about 500 Days of Summer is that it doesn't make light of what we go through in romances but it is honest about it and shows it for what it is, which is often profoundly funny."


Director Marc Webb enthusiastically chose Levitt for the role since his role as Tom is the film's entire foundation where all the rest of the characters are viewed through.

"Joe [Gordon-Levitt] is so very intelligent and he understood every line of this story and of Tom's entire emotional arc," says Webb. "At the same time, he was very inquisitive, asking a lot of great questions. It's easy to forget that Joe started his career on a sitcom, but he also has a very solid basis in the craft of comedy that he brings to Tom. He has an almost scientific approach to playing the straight man—he finds ways to be very funny while still bringing genuine emotion to every scene."

Recently seen opposite Dennis Quaid and Channing Tatum in the action-packed G.I. Joe as Commander Cobra, Joseph Gordon-Levitt, the young but already remarkably diverse actor has distinguished himself over the last few years as uncategorizable and fascinating to watch in such films as Stop-Loss, Killshot, Miracle at St. Anna, Uncertainty, The Lookout and Manic.


He was named as one of the Best Performances of the Year (2005) by the New York Times in the critically-acclaimed drama by Gregg Araki opposite Matthew Goode and Isla Fisher. He also starred in a string of hits, including 10 Things I Hate About You with Heath Ledger and Julia Stiles; Halloween H20 with Jamie Lee Curtis; the animated film Treasure Planet; the hit family comedy Angels in the Outfield with Danny Glover; and The Juror with Demi Moore and Alec Baldwin. His performance in Robert Redford's A River Runs Through It earned him a Young Artist Award for "Best Actor Under Ten."


Prior to attending Columbia University, he starred on the award-winning NBC comedy 3rd Rock from the Sun for which he received two Hollywood Reporter "Young Star Awards" and three Screen Actors Guild Award® nominations for "Outstanding Performance by an Ensemble in a Comedy Series."


Gordon-Levitt made his directorial debut with the short film Sparks, starring Carla Gugino and Eric Stoltz, which was accepted in the 2009 Sundance Film Festival Shorts Competition.