PEP REVIEW: A Journey Home carries a message of hope for troubled families 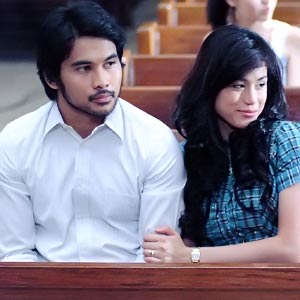 A Journey Home is a family drama about a father who wants to make peace with his son Raffy (played by Joem Bascon, left). Through this film directed by Paul Soriano, Toni Gonzaga (right) shows her versatility as a dramatic actress.

In contrast to the dark-themed movies revolving around the decomposition of the mores of man and the disintegration of Filipino families, the Jubilee Evangelical Church and Jubilee Youth for Christ venture into film to give us a family drama that sees life through rose-tinted glasses.


Directed by Paul Soriano, A Journey Home has its story grounded on reality with its ideals soaring to high grounds. With central themes of forgiveness and solidarity of the family, the film is optimistic about man's ability to make the right choices and change his life for the better.

The death of a loved one becomes the catalyst to reunite Dante (Soliman Cruz) with his son Raffy (Joem Bascon) and daughter Kristine (Athena Tibi). Dante sees his family for the first time in 20 years after leaving them for another woman. Raffy, still scarred by the past, does not want to be associated with his father despite the efforts of his wife Gayle (Toni Gonzaga) to bring them closer. Meanwhile, Kristine is more accommodating to her dad's attempts to rebuild their broken relationship.

A sudden twist of fate brings Dante at the doorstep of Raffy and Gayle's home. This might be God's answer to Dante's prayers for a second chance. Gayle helps Dante to get on the good side of Raffy, but the latter has completely shut his father out of his life. Dante soon develops a bond with his grandchildren Jake (John Manalo) and Tinka (Cha-Cha Canete). However, the imminent collapse of Raffy's business results to his emotional meltdown that strains his family gravely.

A Journey Home carries a message of hope. It upholds moral values and promotes the strengthening of family ties. More importantly, it shows us that forgiveness works both ways. As we forgive others, we do not only help them free their conscience from emotional burden, we also help ourselves unload unnecessary baggage that subconsciously affects our lives. Many films will challenge its simplistic perspective towards filial relationships and personal values. But for those who miss an old-fashioned family drama in the tradition of Tanging Yaman, the morality check that the film provides may prove to be enough.


The ensemble does a decent job in portraying the troubled family. Soliman Cruz lends enough humanity to his repentant character. He tries to pull off a few jokes for comic relief, but oftentimes miss the mark. Joem Bascon's performance as the angst-ridden son is largely overdone during the big moments. His acting works better during the quiet scenes where we see him slowly letting go off his guard but his inability to forgive gets in the way. Meanwhile, Toni Gonzaga shows off her versatility. Her forte may be hosting and doing comedies, but she can also do drama. She is convincing as the good-hearted wife who has nothing but love for her husband and family.

Despite the story's richness in moral values, A Journey Home feels largely flat. Its primary shortcoming is the overused story. Its adherence to clichéd plot devices brings us to a familiar melodramatic territory where we know exactly what will happen next and how everything will eventually be resolved. Due to the film's predictability, we couldn't harness enough empathy for the characters' conflicts.

The film is not bad per se. It is just ordinary. It exudes the same vibe as Lenten episodes of Pinoy TV shows, which are generally well intentioned.


A Journey Home will be screened on October 10 at the Alabang New Life Christian Center (2 Don Manolo Blvd, Alabang Hills Village, Muntinlupa City). It will also have a 7 p.m. screening at SM Megamall on October 17, 2009.

CLICK HERE to view photos during the premiere night of the film.