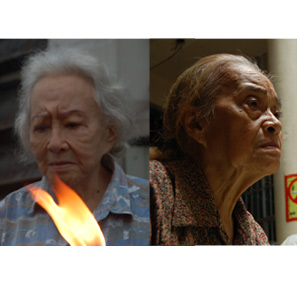 In Lola, Anita Linda (left) and Rustica Carpio (right) portray two grandmothers who work hard for the sake of their grandsons. This Brillante Mendoza film will be screened at Market! Market! in Taguig on October 18 and 20.

Many criticize Brillante Mendoza for sensationalizing the state of Philippine poverty with disconcerting imageries of graphic violence and gratuitous sex. With movies such as Serbis, about a matriarchal family living in a rundown moviehouse where prostitution thrives; and Kinatay, about a washed-up prostitute hacked to pieces by corrupt cops, it may seem that the Filipino auteur has nothing else to offer but shock cinema.

But these critics must have forgotten about Foster Child, Mendoza's very first film in the Cannes Film Festival. This little indie film, screened as part of the Director's Fortnight section, tackles the state of foster care in the Philippines. There's no sex and violence in Foster Child, but it is as evocative and as gut wrenching as his two other movies.

Mendoza's latest body of work, Lola, also doesn't have the seemingly mandatory elements of brutality and carnality. But it doesn't mean that Mendoza has veered away from his cruel exposé of living in a marginalized society. In this film, Mendoza forces his viewers to walk in his characters' shoes until our feet get blisters from the long, agonizing walk. It's a dragging and tedious journey, but once we reach the destination, the pay-off makes it worthwhile.

Lola tells the parallel stories of two elderly women, Puring (Rustica Carpio) and Sepa (Anita Linda). Driven by selfless love, the two scrape the bottom of the barrel to raise funds for their respective grandsons. Sepa wants her dead grandson to have a decent burial despite barely having enough to get by in life decently. Meanwhile, Puring wants to free her grandson after he is incarcerated for killing Sepa's grandson.

Memories of Typhoon Ondoy will inevitable resurface as you watch Lola. The film was shot in Malabon during the rainy season. Typhoon Ondoy flooded Metro Manila because of its continuous heavy rain. But in Malabon, the floodwaters submerge Sitio Ilog in murky water all year round. Mendoza perfectly captured the harsh weather—the strong wind, the downpour, and the flood. He was able to use these elements to punctuate his scenes' dramatic arc.

We see the frail grandmothers drenched in rainwater as they individually attempt to seek financial help from other people—they turn to neighbors, city officials, and even lending institutions. Your heart will be crushed as you see them being ignored or turned away. In the film's most beautifully shot sequence, the funeral procession for Sepa's grandson goes on not with a motorcade but with a handful of boats. The white casket is decorated with colorful flowers that contrast with the bleak surroundings. After a long struggle, Sepa and her family take their beloved dead to his final resting place.

Anita Linda and Rustica Carpio are effortless performers. As the camera zooms in on their faces, you can get a glimpse of a heartbreaking portrait of struggle and repressed emotions written with their wrinkles and facial lines. Despite the storm that messed the characters' lives, they remain resilient and tough.

What might turn viewers away is the pacing that runs at turtleneck speed. A 5-minute scene is stretched to 10 or even 15 minutes. But once you get past that, you'll find Lola all at once poignant and unnerving. This film proves that even without sex and violence, Brillante Mendoza can deliver his hard-hitting messages.


Lola is the opening film of the 11th Cinemanila International Film Festival. It will be screened at Market! Market! in Taguig on the following dates: