Michael Jackson's This Is It grosses P33.2 million in six days 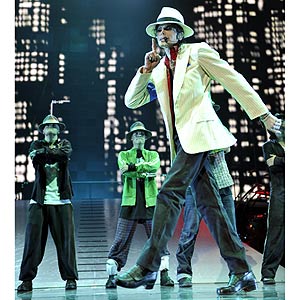 Michael Jackson's This Is It grossed P33.25 million from October 28 to November 2, 2009. This documentary about the King of Pop is still being screened in cinemas and Digital IMAX at SM North EDSA.

MANILA, November 3—The King of Pop moonwalked to the top of Philippine box-office as the music documentary Michael Jackson's This Is It opened at No. 1 nationwide, with a six-day gross of an electrifying P33.25-million for the Oct. 28-Nov. 2 frame. This is according to Victor R. Cabrera, managing director of the film's local distributor, Columbia Pictures.

A backstage look at the late Michael Jackson during rehearsals for his supposed comeback concert tour that would have started last July in London, This Is It bowed in 147 screens across the country, the most ever for any film in its genre. The movie also established the record for all-time biggest opening for a concert or documentary feature.

In the U.S., This Is It received an "A" CinemaScore and is one of the best reviewed films of the year with an 80% fresh rating on Rotten Tomatoes.

"This film is a unique celebration of Michael Jackson and his extraordinary music," said Jeff Blake, chairman, Sony Pictures Entertainment Worldwide Marketing & Distribution. "Kenny Ortega delivered a masterful tribute that shows the pure genius that Michael poured into his creative process and made him one of the best performers that ever graced a stage. In just 5 days, 'Michael Jackson's This Is It' has become the highest grossing concert film of all time and we are elated by the response to this special film by fans, critics and moviegoers from all over the world."

By a large margin, the film's 5-day box office gross has already surpassed the cost the studio incurred to acquire the footage.

Still playing in theaters across the Philippines and Digital IMAX in SM North EDSA, Michael Jackson's This Is It is distributed by Columbia Pictures, local office of Sony Pictures Releasing International.