The creators of The Matrix now bring Ninja Assassin 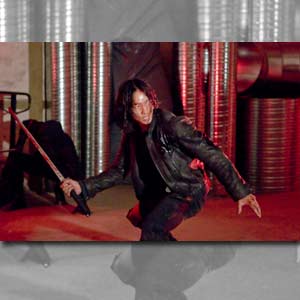 Korean pop superstar Rain will topbill the action-thriller Ninja Assassin, which will open on November 25.

They are the stuff of legend, but for their victims they are all too real. Their swords and shuriken fly fast and, in the blink of an eye, cut to the bone, creating a bloody spray in the wake of the blade. Masters of stealth and dealers of death, these specters strike without warning and strike fear in the hearts of their enemies. No one is safe.


Ninjas are the special forces of the martial arts world, and The Matrix producers Joel Silver, Andy and Larry Wachowski wanted to bring them to the screen as never before, in Warner Bros.' newest action-thriller Ninja Assassin, starring Korean pop superstar Rain.

States Silver, "We each felt that the pure martial arts film is a kind of a sub-genre that hasn't really had its due in the U.S. We were always talking about doing something like taking the legend of the ninja, which dates back to the 14th century, and dropping this silent killer into a truly modern world."

The filmmakers wanted to utilize the classic ninja movie structure in which an enigmatic master schools select children to become unbelievable fighters or assassins, who people in the "real world" of the film believed to be a myth. That is, of course, until their two worlds intersect and the unbelievers witness these incredible martial artists in action.

"Ninjas were the shadowy characters who always came out of the darkness," says director James McTeigue, who also recalls the influences of his upbringing in Australia. "We got anime from Japan and a lot of the TV serials as well, like The Samurai and The Phantom Agents—shows that had elements of the folkloric ninja in them, where the characters were raised in an orphanage or the like. For this film, we talked about those classic elements, but also adding an edgy film noir aspect to it."

"I've always loved the genre, but it seemed like no one had made a serious ninja movie in a long time, at least not in the West," notes co-screenwriter J. Michael Straczynski. "Ninjas have been used so often for comic relief that it felt as if no one was taking them seriously any longer. The chance to make a movie that presented ninjas as being scary as hell was very appealing," he smiles, "and working with the Wachowskis is always rewarding and intellectually daunting because they both have these 12-story brains and you really have to be on your toes to keep up with them."

"Ninja Assassin is an origin story," says screenwriter Matthew Sand. "The orphanage—the idea of these ninjas being a family in a twisted, dark way—and one man, Raizo, coming to terms with a substitute father who was the most awful father imaginable. Where Raizo came from as a character is exactly what the ninja clans are all about. They made him. Motivated by a lost love, his reacting against them rather than becoming what they had in mind, along with the story of the agent investigating the clans, made it a different type of a ninja movie than we'd ever seen."

Opening across the Philippines on November 25, Ninja Assassin is a Warner Bros. Pictures presentation in association with Legendary Pictures and Dark Castle Entertainment.