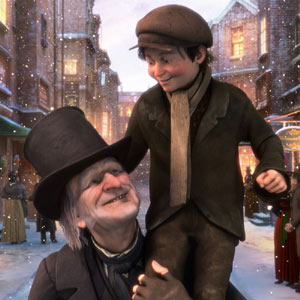 Disney's A Christmas Carol is scheduled to open in IMAX 3D in SM Mall of Asia and SM North EDSA on November 25, as well as in Digital 3D cinemas and regular theaters across the country.

Disney's A Christmas Carol will be the first film from The Walt Disney Studios slated for IMAX theatres under a new five-picture arrangement the studio reached with IMAX Corporation. This was announced recently by Mark Zoradi, president, Walt Disney Studios Motion Pictures Group.

In the Philippines, the spectacular 3D adventure film from director Robert Zemeckis and starring Jim Carrey, is scheduled to open in IMAX 3D in SM Mall of Asia and SM North EDSA on November 25, as well as in Digital 3D cinemas and regular theaters across the country.

Robert Zemeckis' takes the art of performance capture to the next level with the release of Disney's A Christmas Carol, the multi-sensory 3D film captures the fantastical essence of the classic Charles Dickens tale in a groundbreaking motion picture event.

In the film, Ebeneezer Scrooge (Jim Carrey) begins the Christmas holiday with his usual miserly contempt, barking at his faithful clerk (Gary Oldman), and his cheery nephew (Colin Firth). But when the ghosts of Christmas Past, Present, and Yet to Come (all played by Carrey) take him on an eye-opening journey revealing truths Old Scrooge is reluctant to face, he must open his heart to undo years of ill will before it's too late.

Disney's A Christmas Carol will lead off an impressive slate of upcoming films from the Studio and a roster of top filmmakers that may include director Tim Burton as well as producer Jerry Bruckheimer. This arrangement makes some of the Studio's most highly anticipated theatrical releases from November 2009 and beyond available to IMAX venues across America and around the world.

Commenting on the announcement, Zoradi said, "Experiencing great motion pictures in IMAX takes moviegoing to a whole new level of excitement, and we're thrilled to be working with the pioneers at IMAX in this venture. We can't think of a better way to launch than with Robert Zemeckis' fantastic new approach to the Dickens' classic, A Christmas Carol. Following that, we have an incredible slate of new Disney Digital 3D motion pictures from some of the industry's most accomplished and innovative filmmakers, and we know audiences are going to love being immersed in these great fantasies and adventures in IMAX's format."

Chuck Viane, president of distribution, Walt Disney Studios Motion Pictures added, "IMAX has a great track record and a loyal following when it comes to presenting epic entertainment, and we believe we have a unique and exciting slate of films that lend themselves to the IMAX format. With the introduction of IMAX's digital projection system, and the addition of new venues across the country, this is a great time to be working with IMAX to bring the ultimate moviegoing experience to audiences everywhere."