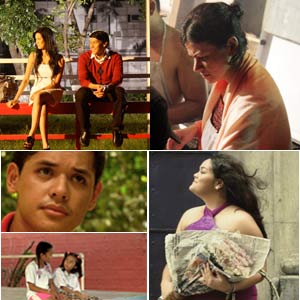 Coinciding with the 15th anniversary celebration of movie cable channel Cinema One, today's hottest celebrities will grace the awards night scheduled this Sunday, November 15, at the ABS-CBN Dolphy Theater.

The ceremony will be hosted by heartthrob Piolo Pascual and fast-rising box-office star Eugene Domingo. Kapamilya stars will also present awards in different categories of the annual film fest. Danny Zialcita and Cannes Film Festival Best Director Brillante Mendoza (who are given a tribute this year) as well as blockbuster directors Joyce Bernal and Cathy Garcia Molina are expected to grace the event. Sam Milby will also render a intermission number.

Now on its 5th year since its inception in 2005, this year's Cinema One Originals does not follow any theme to encourage entries with novelty and offer out-of-the-box plotlines.

This year, five finalists are vying for awards and will be screened from November 13-17, 2009 at Gateway Mall in Cubao. These are:

SYNOPSIS. Fate has been reasonably fair to Max, a full-figured young woman with a ton of confidence, a hefty bank account, and a hearty sex life. Needless to say, she's pretty satisfied with what's on her plate. No complications. No weight issues at all. Life is sweet.

Until the sex part hits a snag.

Max is consumed by doubts, both crucial and trivial, mostly involving her waistline. She learns to cope in a manner typical of her upbringing.

Meanwhile, Max's one-time lover Papu has a size-related dilemma of his own. He embarks on a futile search for redemption after an embarrassingly short encounter.

Maximus & Minimus is a comedy about excess and shortcomings, with an ounce of sex and a pound of quirkiness.

SYNOPSIS. Mama Saleng is a religious fanatic who owns a boarding house and a canteen. As a child, Saleng was accused, along with her grandmother, of being an "aswang." Her thirst for human flesh was quenched during the Martial Law years when she met Jessie Beltran, an undercover agent tasked with the brutal extermination of activists on Panay Island. Mama Saleng came to enjoy killing, becoming like the "aswang" she was accused of being.

She continues to indulge her monstrous appetites among her hapless lodgers.

SYNOPSIS. When Fredrick Aguila visits the epidemic-stricken area of Dagatan, San Jose, Batangas, his only mission is to identify the disease that is spreading throughout the barrio and killing all the livestock.

In the course of his investigation he not only uncovers the secrets of the barrio, but miraculously heals a young girl.

News of his healing power spreads, and the villagers demand that he cure their sick children as well. Fredrick discovers his true identity, and his mysterious connection with the events in Dagatan.

SYNOPSIS. What if the attractive mute guy you meet on the metro train thinks you're also deaf? Are you ready to pretend to be deaf? And what if you were both just pretending so as not to disappoint each other?

This is a romantic comedy about two souls entangled in a loop of lies, both of them hoping that true love will straighten everything out.

SYNOPSIS. In a quaint seaside village, 6-year-old Baning yearns to learn her ABCs. While the other kids attend the local public school, she has to wait by the roadside for classes to end so she can play school with Maymay.

Maymay, aged 9, is distracted by her mother's flirtation with a local lad. She misses her father who's working abroad, and she has a crush on an older boy who seems oblivious of her. In contrast, Baning seems unaffected by her family's poverty and the fact that her slow, delinquent brother gets to attend school while she helps her mother with the laundry. What really bothers her is the way Maymay's personal dramas affect her makeshift education. Then there's the matter of Bobo the dog, the drunk next door, and the dreadful box hidden in the shed.

11:50 AM Yanggaw Best of Cinema One Originals