Bakal Boys to compete in 2 European film fests this month 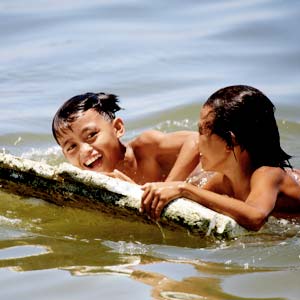 Young boys swim in the murky waters of Manila Bay searching for scrap metal to sell to junk shops. This is the basic premise of Bakal Boys (international title: Children Metal Divers).

Prior to these two festivals, Bakal Boys was screened in Vancouver, Canada (where it was given a Special Mention in the Dragons and Tigers competition section) and in Pusan, South Korea.


The official website of the Vancouver IFF says that the film is "so realistic that it's a virtual docu-drama, the film achieves a miraculous rapport with its mostly non-professional cast."


(CLICK HERE to read PEP's review of this indie film)

COUNTRY IN FOCUS. The Philippines is currently the country in focus at the Thessaloniki International Film Festival.


Aside from Bakal Boys, the following Filipino independent films will be screened:

The Muzzled Horse Of An Engineer In Search Of Mechanical Saddles, Khavn de La Cruz, 2008 , Philippines

Filipino director Lav Diaz is a member of the international jury of the Thessaloniki IFF where Bakal Boys is competing.

The seven-member international jury called to judge the films of the International Competition section and to award the Golden and Silver Alexanders plus a number of additional awards, is composed of: