"Guimaras: Short Films From the Oil Spill" to be screened at UP Film Institute 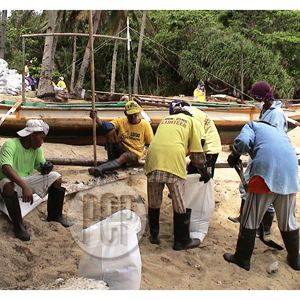 Bunker O: Sumirib Plus by JP Carpio is one of the short films included in Guimaras: Short Films from the Oil Spill, which will screened at the UP Film Institute this April.

The University of the Philippines Film Center (now UP Film Institute) mounts its own celebration for environmental awareness with a distinct program of films for the last two weekends of April. The main highlight will feature a marathon of screenings for Guimaras: Short Films from the Oil Spill on April 20 and April 21 at 7 p.m.

Featured are the works by independent filmmakers all tackling the effects of the oil spill on the environment and the lives of the people on Guimaras island.

The much-awaited UP Film Institute showcase of Guimaras: Short Films from the Oil Spill will be preceded on April 20 by I Dreamed of Africa from director Hugh Hudson and on April 21 by the legendary filmmaker Akira Kurosawa's Dreams.

As part of the environment-friendly line up this month, starting 5 p.m. on April 26, there will be a series of screenings for this year's Oscar winner for Best Documentary Feature, An Inconvenient Truth. Directed by Davis Guggenheim, the docu-feature hallmarks Al Gore's crusade to raise awareness on the issue of global warming.

Other screenings for the film are on April 27 at 2 and 7 p.m. and April 28 at 7 p.m. Completing this year's cycle for UP Film Institute's green festivities is another masterpiece from Kurosawa-a Japanese co-production with Russia, Dersu Uzala. The film screens for one day only (April 28) at 2 p.m.