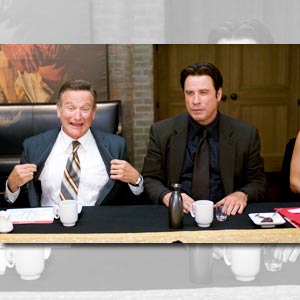 Two best friends—one unlucky-in-love divorcee (Robin Williams) and the other a fun-loving bachelor (John Travolta)—have their lives turned upside down when they're unexpectedly tapped to take care of 7-year-old twins while on the verge of closing the biggest business deal of their lives. See how they will fare in Walt Disney Pictures' Old Dogs.

The not-so-kid-savvy bachelors stumble in their efforts to take care of the twins leading to one debacle after another, and perhaps to a new-found understanding of what's really important in life.

The family comedy is directed by Walt Becker (Wild Hogs) and written by David Diamond. The film was produced by Andrew Panay (When in Rome), Robert Levy (Wedding Crashers) and Peter Abrams (The Comebacks). Garrett Grant is executive producer.

Both Travolta and Williams were called on for physical comedy. "It's been exciting to be this physical at this age—flying 65 feet in the air in a superhero suit that looks like Liberace's stunt double on steroids," says Williams. "If you want something funny, just run me into a wall."

Andrew Panay says Travolta and Williams exhibited two completely different styles of improvisation while shooting Old Dogs. "John has such a controlled improv, it's always coming from a real place. He's always finding the joke within the joke. Robin is a machine gun. He keeps on firing the funnies. So you have two different approaches, both incredibly funny," he says.

Director Walt Becker's easy-going style was a good match for his creative cast. "I always feel like if you're not letting your actors contribute, you're not getting everything you can from them," he says. "And, frankly, I don't care if an actor wants to do a scene standing on his head, because that's just the way I go. I get one take for the script, one for me, and the rest is for the actor."

Becker's method is one the actors truly appreciate. Says Travolta, "I never go outside the box of the character, because if I do, it'll end up on the cutting-room floor. I make sure all my improvisations are character-motivated."