Nobody Nobody but Juan marks Dolphy's 65th year in showbiz 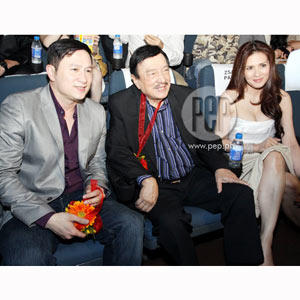 This 2009 marks the 65th anniversary of Dolphy (middle) in Philippine showbiz. The Comedy King is grateful that viewers have supported his latest Metro Manila Film Fest entry titled Nobody, Nobody But Juan. During the premiere night last December 17, he was joined by his son Eric Quizon and longtime partner Zsa Zsa Padilla. CLICK HERE to view photos taken during

Dolphy, the King of Philippine Comedy, is celebrating the holidays with a grateful heart. This is because of the overwhelming support that his film Nobody, Nobody But Juan is currently receiving from the viewing public on its current run in the 2009 Metro Manila Film Festival.

Aside from the comedic timing that is always present in every Dolphy movie, Nobody, Nobody But Juan reels in the masses with its easily relatable plot: a regular guy in his twilight years develops a loyal connection to a popular noontime show (in this case Willie Revilliame's Wowowee), which by a stroke of fate or luck changed his life and reconnected him to his past.

Both heartwarming and funny, the film is meant to entertain every member of the family. The Comedy King tickles funny bones as much as he tickles the hearts of viewers with his most touching portrayal of the homesick and lovesick Juan.

The film is also a product of love from Dolphy's very own family. His son, Eric Quizon, conceptualized, directed and produced the film through Kaizz Ventures along with his dad's RVQ Productions and Joe Aldeguer Productions.


Epy Quizon, who bears the most striking resemblance to the young Dolphy, also played the young Juan in the movie. Meanwhile, his youngest son Vandolph plays the young version of Juan's long-lost friend.

Nobody, Nobody But Juan also serves as Dolphy's gift to his fans in the celebration of his 65th year in the field of entertainment. The movie borrows many interesting details from the comedian's real life both on stage and in love. As a matter of fact some of his long time friends in show business also went all out in supporting Dolphy in this current venture. Veteran actor Eddie Garcia plays his long-lost friend in the movie while Gloria Romero plays his long-lost love.

Comedians Eugene Domingo and Pokwang also lent their brand of humor in support of the King of Comedy, along with dramatic actresses G Toengi and Heart Evangelista. Popular noontime show host Willie Revillame also collaborated in the project by appearing in the movie as himself.

Bibeth Orteza wrote the comic script of this Metro Manila Film Fest entry, which is currently being screened in cinemas nationwide.

Dolphy's comedic timing in the film will remind everyone why he was given the title of King of Philippine Comedy and why no one has taken his place in the field of local entertainment.


CLICK HERE to view photos taken during the premiere night of Nobody Nobody but Juan!