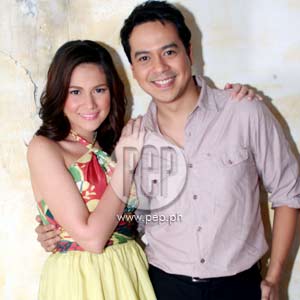 Bea Alonzo and John Lloyd Cruz (both in photo) will soon bring life to Mia and Allan, the love team in Miss You Like Crazy. Maricar Reyes (not in photo) is cast as the girlfriend of John Lloyd in the film. This Star Cinema movie directed by Cathy Garcia-Molina will open in cinemas by February 24, 2010.

Star Cinema presents love from the other side of the looking glass in their post-Valentine's Day offering titled Miss You Like Crazy. The movie, directed by Cathy Garcia-Molina, reunites the hugely successful love team of John Lloyd Cruz and Bea Alonzo in a heart-clenching tale of love at the wrong time. PEP (Philippine Entertainment Portal) sat down with the stars and director on the set of this highly-anticipated comeback movie as they talk about bringing the "kilig" to a different level, first day jitters, and why people just can't get enough of the Bea-Lloydy tandem.

Last Thursday, January 29, the lead stars conducted their pictorial at an old ancestral house in Pasig City. John Lloyd and Bea were having their makeup done while Direk Cathy spilled some behind-the scenes secrets: "40 percent of the movie has been shot here, and the rest will be done in Malaysia."


Direk Cathy and John Lloyd collaborated on A Very Special Love and You Changed My Life, wherein Sarah Geronimo became the leading lady of the matinee idol. The first installment of the John Lloyd-Sarah tandem, AVSL, earned for them their respective titles as Box-Office King and Queen of 2008.


The female director refuses to reveal too much about the movie except that it is something fresh for the Bea-John Lloyd love team. She narrates, "John Lloyd is Allan Alvarez, his girlfriend is Maricar Reyes who is also the daughter of his boss. Bea is Mia Samonte...she works at the front desk of a hotel in Malaysia. For me, the plot is a normal love story told in a unique way, ibang-iba ang tono. Mas mature ang kilig moments, pero walang masyadong romcom [romantic comedy] elements."

But even if the movie is an experimental take on the solid Bea-John Lloyd tandem, Direk Cathy assures that the "kurot sa puso" premise of the movie is something moviegoers can definitely relate to. "Di ba minsan may kausap tayo na parang ayaw mo nang matapos, you can talk about anything under the sun. May ibang tao open ka ng open [pero] laging napuputol...hindi na-fu-further ang connection, ganun yung klase ng love story ni Bea and John Lloyd."

IMPERFECT LOVE STORY. As the trailer suggests, the movie talks about an "imperfect love story," but John Lloyd hits the nail on the head when he says the movie also tackles infidelity. Dealing with such a flawed character was a struggle for the young leading man. He points out: "Coming from Noel in my last movie, In My Life, he was such a loveable character. Allan is very flawed, litong-lito s'ya, di nya alam kung ano ang gusto nya, and it's hard not to imagine this movie being judged by its audience, kaya alagang-alaga ang bawat eksena at angulo."

Despite the touchy nature of the flick, John Lloyd is happy to be reunited with Bea and believes that working apart has helped in the maturity of their love team. "After 8 years of working together, hindi naman talaga biro yun. Our team-up has matured in a way na parang pag gumagawa ka ng project hindi sunod-sunod, tingin ko involved ang maturity doon, and when you reunite it becomes a big event all of a sudden," enthuses the charismatic leading man.

Bea believes that the secret of the love team's longevity is their ability to distinguish reel from real. "Yung pagiging totoo sa tao, na sinsuportahan kami with what they see onscreen and not because of our personal lives off screen," explains the mestiza actress.


In real life, Bea had a relationship with actor Miko Palanca while John Lloyd was committed to Preview fashion editor Liz Uy. However, their relationships have already ended.


The lead actress waxes sentimental about reuniting with Lloydy and Direk Cathy, "Na-miss ko ang tawanan moments namin ni Lloydy at ang kanyang pagiging mapagbiro sa set. Working with Direk Cathy, laging may collaboration na nangyayari, she asks me and Lloydy what we would do in each scene, ang sarap ng feeling for me na may contribution ka sa bawat character and you can really call your character your own. My character is not the perfect girl, hindi s'ya laging nasa tama, but it's still a very nice story and that's what I like about it."


The movie may not have all the answers, but this Star Cinema movie dares viewers to break boundaries in search of their own.

Miss You Like Crazy will open in cinemas nationwide starting February 24, 2010.