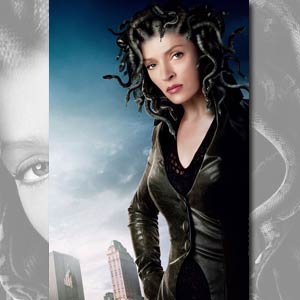 Uma Thurman (in photo) will bring life to Medusa in an upcoming film, which is a contemporary take on Greek mythology. Percy Jackson and the Lightning Thief will open on February 12.

Uma Thurman plays Greek mythology's mesmerizing Medusa in Chris Columbus' Percy Jackson and The Lightning Thief. The movie revolves around Percy (Logan Lerman) who incurs the wrath of Zeus who believes the boy has stolen his powerful lightning rod. Set to clear his name, Percy son of a mortal mother Sally (Catherine Keener) and the Greek god Poseidon (Kevin McKidd), is a demigod and has yet to discover his innate powers he inherited being the son of the sea god.

Along his journey to find the lightning thief, Percy encounters Medusa (Thurman) who according to legend is the Gorgon with the head of snakes. Anyone who gazed at her directly would immediately turn to stone. His confrontation with Medusa is a pivotal moment in his daunting journey.

Thurman hisses in the following Q&A regarding her latest role as the stone-turner Medusa.

I was a great fan of Chris Columbus. The script was fantastic, Chris wanted me to do it, and it seemed like a fun idea. So I just went online and I did some research about Medusa to get an idea about the character. I thought her story was very interesting and quite sad.

What was it that intrigued you about her story?

She was a maiden, a priestess of Athena and was known for having extremely beautiful hair. She was worshipping in the temple of Athena when Poseidon took a liking to her and ravished and abused her for his pleasure. Athena was angry that someone else was admired over herself because she was a lover of Poseidon, so she took revenge upon the offended maiden by damning her to immortality and loneliness and a head of snakes. Should she ever seek company from anyone, they would turn to stone.

What did you think of the idea of bringing the Greek gods into contemporary America?

It is sheer brilliance. When I read the script it was one of the most intelligent and exciting ideas I had seen, both actively alive and playful. It is full of richness and character, and I thought it had something worthwhile to say.

How important do you think it is to have inspiring and uplifting films like Percy Jackson that are also entertaining?

Very important. There is a lot of horribly boring, dreadful children's entertainment and I am glad not to be part of it. For this one, the script was great, it was beautifully imaginative, I loved the subject and it had a great director standing behind it too.

You have CG (computer generated) snakes on your head. How do you interact with your snake hair?

The snakes were computer generated and I had a green cap on while I was filming but just for fun at a rehearsal, we brought in a plethora or "flock" of real snakes. Medusa slightly talks to them and looks at them so I wanted to bring a sense of reality to the unreality of it all.

What do you think of the theme of this film? It is about a boy who becomes a very unlikely hero and it has an interesting take on learning disabilities.

I think it is great because I have a daughter who's dyslexic and I was dyslexic myself. And as many times as people say 'you have other gifts; for every problem God gives you, he gives you a problem solving skill', it is always difficult. This is a very empowering idea for children and is a subject very close to me.

Do you enjoy reading now?

I very much enjoy reading, but I didn't read a book on my own until I was nine years old and that wasn't a very complicated book. I was 'dying' in first and second grade being given See Spot Run over and over again and struggling through it and blaming myself. And that's just the reality of the beast.

Is there any particular Greek god that you think is fantastic, if you had to pick one?

I always love the story of Cupid and Psyche. For some reason I was very fond of all the Greek myths in school, so for me this film was a lot of fun. I just happened to really love studying the gods and goddesses. I think from a psychological point of view, there's a huge interest in the stories and how they relate to human life.

MORE ABOUT UMA. Uma Thurman was born in New York and as a teenager studied at the Professional Children's School. Her sparkling career began with a series of spectacular roles. Her recent film credits include, The Adventures of Baron Munchausen, Dangerous Liasons and Henry and June. Thurman was nominated for a best supporting actress Oscar for her role in the 1994 film Pulp Fiction. Her many other films include Where the Heart Is, Final Analysis, Jennifer 8, Mad Dog & Glory, Even Cowgirls Get the Blues, A Month By the Lake, TheTruth About Cats and Dogs, Batman and Robin, Les Miserables, Paycheck, Tape, Kill Bill: Vol. 1 and Kill Bill: Vol. 2, Be Cool, Prime, The Producers, My Super Ex-Girlfriend and The Accidental Husband.

Percy Jackson and The Lightning Thief opens February 12 in theaters nationwide from 20th Century Fox to be distributed by Warner Bros.