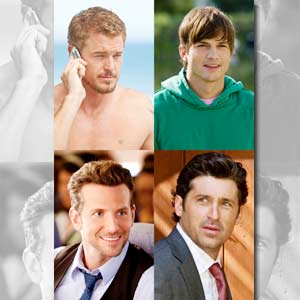 Men looking for love are played by Bradley Cooper, Eric Dane, Patrick Dempsey, Jamie Foxx, Topher Grace and Ashton Kutcher, in New Line Cinema's Valentine's Day, a romantic comedy that follows the intertwining storylines of a group of Los Angelinos as they find their way through romance over the course of one Valentine's Day.

The film starts out on a romantic note between Reed Bennett, played by Kutcher, and his girlfriend Morley, played by Jessica Alba. Morley awakes as Reed is attempting to place a diamond ring on her finger. "I don't know if he's hopeless, but he is definitely a romantic," says Kutcher. Reed begins this particular Valentine's Day focused on his own love life, and when Morley accepts his proposal, he's ecstatic.

Patrick Dempsey plays Dr. Harrison Copeland, a surgeon who's the new love of Reed's friend, Julia (Jennifer Garner). "I think Valentine's Day is actually a very unromantic day because you can't really force romance," says Dempsey. "It just has to happen naturally. There is so much pressure to make that day special and have a good time, it's virtually impossible to have one."

Jamie Foxx plays Kelvin, a sports reporter who resents being temporarily sidelined from the sports desk to do what he considers a "fluff" story about Valentine's Day. "Kevin's boss wants him to get out there and find happy, romantic stories—that old school 'Will you be my valentine?' nonsense," says Foxx. "But he wants to be taken more seriously as a sports journalist. He's just waiting for his break—that one big interview."

The scoop Kelvin wants is the major sports story of the day: the future of star professional quarterback Sean Jackson, whose career is in doubt after his team lost in the playoffs. Jackson is played by Eric Dane, who notes, "If you are 25 and lose in the playoffs, the attitude is, 'We'll get them next season.' If you are 35 and lose, they want you to retire. So Jackson is in the twilight of his career, although I think he's still somewhat relevant as an athlete. The big question is whether or not he's going to hang it up or continue playing."

Topher Grace is Jason, an agent-in-training, working in the mailroom at a big talent agency, who's dating Anne Hathaway's character, Liz. "What I relate to about Jason and Liz is that they are only about two weeks into their relationship when Valentine's Day rolls around, which has personally happened to me. It's a celebration of love and commitment, so, Jason is confused about how much he needs to do. But he's smart enough to know he doesn't want to mess it up."

While most of the film's characters are grounded in Los Angeles, two of them are on a plane, en route to the city. Bradley Cooper and Julia Roberts play seatmates on the plane Holden and Kate. Holden provides a shoulder for Kate to sleep on, not to mention a good ear, during a 14-hour flight.

Valentine's Day reunites Cooper and Roberts, who previously worked together in the play Three Days of Rain on Broadway. "We did eight shows a week, so I got to know her pretty well," Cooper says. "It definitely helped to have that prior relationship coming into this film because we spent almost all of our time sitting side-by-side, so it's pretty close quarters. But we really had a great time."