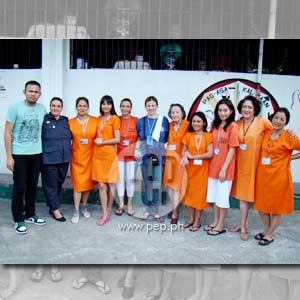 In an exclusive interview with PEP (Philippine Portal Entertainment), independent film director Adolf Alix Jr. said he was looking for something different after his last project Karera (2009) topbilled by Laurice Guillen. It seemed that the prolific director found what he was looking for in the confines of the Mandaluyong Correctional Institution for Women (MCIW). This where the story of Presa took shape.

Presa is the second to Direk Alix's trilogy about the lives of famous media personalities years after their glory days in the industry had finally ended. The first one had been Adela (2008) where veteran actress Anita Linda portrayed the role of a former radio personality who ended up in the slums of Manila.

With the success of Adela both in the local and international scenes and the recognition of Anita Linda's acting, Direk Adolf opted to cast her once more for a major role in Presa. This time, Anita breathes life into an old actress who still thinks and acts like a prima donna despite being demoted to no more than an inmate in the correctional. But as long as the so-called inmate "squad leader," played by Rosanna Roces, continues giving protection to this old diva, she eventually gets her way.

SYNOPSIS. Presa bares a week of an old lady's life inside a correctional. Almira (Anita Linda) used to be a popular actress back in her younger years. When her glory days reached an end, she became desperate and resorted to selling drugs. Eventually, she was caught and put inside a women's correctional for her crime.

It is Christmas week. Once again it's that time of the year when the annual presidential pardon is granted to selected inmates. Almira has high hopes she'd be one of them. Her excitement leads her to setting up an arrangement with her lawyer to hasten her release.

While she waits to be discharged, she is asked to participate in a film being shot inside the institutional where she is confined. Being the diva that she is, she refuses to have a "small part" in any film. In the end, she accepts the meager role after learning she is to spend the rest of her waking days deprived of her freedom. She faces another heartbreak when during the shoot she struggles with delivering her lines. When once she was a celebrated actress, now she has just become an old lady with a weak memory.

Presa also discusses the status quo which apparently exists inside the institution. Several characters are introduced to give justice to this situation. An example is the character played by Liza Lorena—an aristocrat who brings in with her a yaya inside the correctional. Jodi Sta. Maria, on the other hand, plays a role of an inmate who strives hard to earn money inside the institution to help her family outside.

Another distinct character is that of Rosanna Roces, a "squad leader" who sees Almira as her mother, thus, developing an attachment to the older woman and putting her under her protection. Rosanna's character in the movie committed a crime by killing her ex-lover when she discovered he was abusing her daughter. To her utter disbelief, her daughter could not forgive what she did for her, making her wonder if there was something between her daughter and her former lover.

BASED ON REAL INMATES. Direk Adolf says he likes his films to be relevant to the viewers.

He reveals that some of the characters in Presa were inspired by real inmates whom they interviewed during their research and immersion. And backing him up with details for the story is Direk Adolf's co-writer and friend Agnes de Guzman who has been volunteering in the Mandaluyong Correctional for 15 years now.

Presa also happens to be the first venture of Astral Productions.

CIRCA. Direk Adolf revealed that he already has a working title for the third installment of his trilogy, which will be called Circa. According to the director, Circa will be focusing on a reunion of old superstars. Anita Linda will also be cast in the third film, which may begin shooting by the end of the year.

In the meantime, viewers should not miss Presa in digital theatres by May 2010. Direk Alix is also planning to have a special premiere inside CIW wherein the proceeds will go to a fund-raising project for the institution.