Hugh Grant romances anew in Did You Hear about the Morgans? 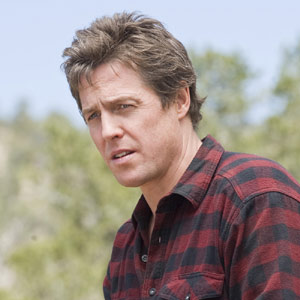 Hugh Grant's character will attempt to fix his marriage to Sarah Jessica Parker in Did You Hear About the Morgans?

Hugh Grant tries to win back the heart of Sarah Jessica Parker in Columbia Pictures' new romantic comedy Did You Hear About the Morgans?

The riotous comedy follows a highly successful Manhattan couple, Paul and Meryl Morgan (Grant and Parker), whose almost-perfect lives have only one notable failure—their dissolving marriage. But the turmoil of their romantic lives is nothing compared to what they are about to experience: they witness a murder and become targets of a contract killer.

The Feds, protecting their witnesses, whisk away the Morgans from their beloved New York to a tiny town in Wyoming, and a relationship that was on the rocks threatens to end completely in the Rockies ... unless, in their new BlackBerry-free lives, the Morgans can slow down the pace and rekindle the passion.

Writer-director Marc Lawrence utilizes this fish-out-of-water scenario of the Witness Protection Program as an exciting new way to force the couple to face their issues in the wilds of Ray, Wyoming. "This high maintenance New York couple," explains Grant, "are sent into the Witness Protection scheme in a tiny cowboy town in Wyoming, and that has interesting effects on their marriage."

With that in mind, Lawrence turned to Hugh Grant, who had starred for the writer-director in Music and Lyrics and Two Weeks Notice. "Of course, I wrote it for Hugh," says Lawrence. "We'd worked together so often that it was natural to mention the idea to him, and he liked the idea. But there was no formal agreement. I write the script and if he likes it he'll think about doing it, and if he doesn't he doesn't."

"I think Marc is a real comic genius and will be regarded as such in the years to come. And I think this is his best script, so, I couldn't resist it," says Grant. "There are a lot of romantic comedies but very few of them are actually funny. Marc really does write funny dialogue."

For Grant, having the writer as the director is always a selling point on a project, as he believes it makes for a better film. "The fewer authorial voices behind a film the better," Grant continues. "What you dread are the ones that are done by a team of writers, and then there's a hired director, and a hired producer, and then the studio will have their say...and then you're in hell."

Grant is bombarded with romantic comedy scripts. What, then, gets through on his radar?

"I know it when I see it," he says. "It really is just that simple—what I judge to be good writing, which means that, number one, you want to turn the page because you want to know what happens next—that's vastly important—and then if it's a comedy, it's got to make me laugh. Those two things are surprisingly rare."

Opening in the Philippines by February 12, Did You Hear About the Morgans? is distributed by Columbia Pictures, local office of Sony Pictures Releasing International.