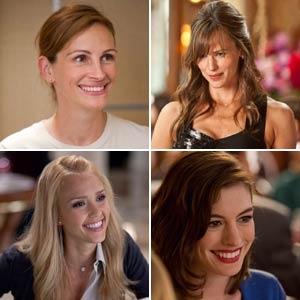 On this particular Valentine's Day, six women are about to open their hearts and take that big leap for love. Jessica Alba, Jessica Biel, Jennifer Garner, Anne Hathaway, Emma Roberts and Julia Roberts star in Warner Bros.' Valentine's Day, the new romantic comedy from Gary Marshall (Pretty Woman). The film follows the intertwining storylines of a group of Los Angelinos as they find their way through romance over the course of one Valentine's Day.

Jessica Alba describes her character Morley as "much more buttoned-down and conservative than her fiancé, so I guess it's an example of how opposites attract. She's completely taken by surprise by his proposal. She is entirely focused on her career, so she might be a little hesitant about making that kind of commitment, even though she says yes."

In fact, Morley's acceptance comes as a surprise to her boyfriend's closest friends, beginning with Julia Fitzpatrick (Jennifer Garner). But Julia would rather concentrate on the wonderful new man in her own life.

"Julia has not had a boyfriend in a long time and she is finally in love," says Garner. "She wakes up on Valentine's Day feeling like the happiest person in the world, but as the day goes on, her heart goes through some definite ups and downs. This film celebrates the day devoted to love, both winning and losing, and having and not having."

Emma Roberts plays Grace, a teenage student who has decided to take her romance with her boyfriend to the next level.

"She is trying to have the perfect Valentine's Day with her boyfriend, which includes the two of them losing their virginity," Roberts reveals. "Throughout the day, they keep trying to meet up, but things just keep going wrong. Her boyfriend is doing everything he can think of to be very sweet and romantic, but his attempts keep failing. He definitely gets an A for effort, though. It just goes to show that Valentine's Day can cause all kinds of problems for people, but I think everyone should just have fun. It doesn't have to be a couples thing, it can just be about family and friends...as long as you're with people you love."

Jessica Biel appears as publicist, Kara Monahan, who has spent the day fielding questions about the intentions of her star client, pro-quarterback Sean (Eric Dane), while stressing over her annual "I Hate Valentine's Day" party, held for people, like herself, who are perennially single on a holiday designed for couples.

"What I love about Kara is that, on the one hand, she's a very-together professional, but she's also very passionate and emotional," says Biel. "I think Valentine's Day can make people a little crazy."

Anne Hathaway plays receptionist Liz Curran who makes her living on the phone in more ways than one.

"She moonlights as a phone-sex operator," the actress offers. "But Liz is a girl with real financial worries, so she sees it as a means to an end. She certainly doesn't want to do it forever, but, for now, she has to do it until something better comes along. I think Liz is one of those women who are very open to what the universe has to offer, even when it seems kind of unusual."

While most of the film's characters are grounded in Los Angeles, one of them is on a plane, en route to the city. Julia Roberts appears as U.S. Army Captain Kate Hazeltine, who is on a short leave and is flying 14 hours to make an important rendezvous, although she never says with whom.

"One of the things I like about the part of Kate is that there is a little mystery about her, and I think where her story ends up is very sweet and truthful," says Roberts.