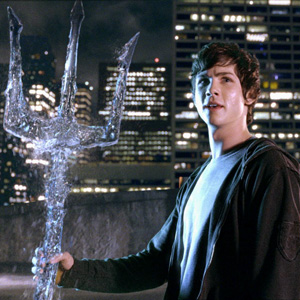 Logan Lerman stars as the unlikely hero turned savior of the world Percy Jackson in the adventure-fantasy movie Percy Jackson and the Lightning Thief.

Fast-rising actor Logan Lerman plays the titular role in the upcoming mythological adventure in Percy Jackson and the Lightning Thief where he plays an unlikely hero whose dyslexia wired him to overcome the quest to prove his innocence.

In the movie, Percy Jackson has a lot to contend with. A teenager who seemed to be heading nowhere suddenly discovers that the survival of civilization rests on his shoulders. At first, this unlikely hero seems ill-equipped to deal with the daunting challenges that lay ahead, including minotaurs and wrathful Greek gods. But this is in fact no ordinary boy. Percy has inherited special powers that gradually become apparent. He is in fact the son of a mortal and the sea god Poseidon, in other words, he is a demi-god.

When the powerful lightning rod belonging to Zeus goes missing and Percy seems to be the obvious suspect, his life changes irreversibly and he embarks on an extraordinary quest.

Though being lead actor in a big film is new to him, Lerman is as deft when it comes to thespic chops. Logan Lerman had an auspicious start to his career in The Patriot with Mel Gibson. Since then he has appeared in What Women Want, Riding In Cars With Boys, The Butterfly Effect, Hoot and The Number 23. He also received great reviews for his role in 3:10 to YUMA.

With his palpable charm and talent, Lerman is definitely the face to watch for in Hollywood's up and coming actors.

How much did you know about Greek mythology prior to starting work on the film?

My knowledge before signing onto the project was limited to what I had studied in school. But once I found out that I was doing the movie, I started reading all the Greek myths and learning about all the gods and who they are, and their relationships with one another. Percy's supposed to have this inherited knowledge, somehow he knows everything about their history and I wanted to make sure that came across on screen.

How did you get the part?

It was the easiest thing for me and I don't know why. I literally just walked into the room one day and met Chris [Colombus, the movie's director], and I guess I heard that he said he could not do it with anyone else, he wanted me. I just had to do a test, I was so lucky. I went straight into training and the way it all happened made me kind of oblivious to the fact that it was such a big movie—until I saw the sets. At first it was overwhelming, but you ride on the intensity and the adrenaline of the scenes and get into it.

Did any of the veteran actors give you any advice?

Pierce [Brosnan, his co-star] told me, "Man, it's going to get crazy for you. Be prepared. Stay true to yourself." I guess the attention could get a little nuts but I haven't really noticed it that much yet, so it's fine.

What kind of boy is Percy?

In the beginning you find out he's just like any kid with a learning disability, he has dyslexia. He's had to overcome those difficulties his whole life and you find out that this disability actually works to his advantage as a demi-god. The film really has a universal theme, because everybody goes through this kind of journey of trying to find out who they are. That's really the underlying theme of the whole film along with a lot of action, adventure, and Greek mythology.

Are things changing at all for you?

They are changing a little. I went to the midnight showing of The Twilight Saga: New Moon with my best friend, Dean Collins. And they showed the Percy Jackson trailer. We went in and we thought we could sit down for a second and nobody would know who I was, but I swear every head turned and people gasped. The theater went silent, every one was looking at us and it was really awkward, then they all started to approach us. That's when I knew that this was going to be a really big movie.

There is a lot of talk about you becoming a heartthrob, how do you feel about that?

Well it comes with the territory and if that kind of attention comes from being a part of a good film, then I'm totally ready for it. But I want to keep my distance from that really, because I want longevity in my career. I just want to do good movies like this one and make smaller films too.

Why did you want to act in the first place, you have already made some great films?

I started to act when I was younger, because I wanted to do something creative and I wanted get out of school. I was a little kid who just wanted to get out and have fun. Living in L.A., acting is accessible and it seemed easy to try it out and give it a shot. Somehow, when I was really young I convinced my parents to try and it ended up taking me here. At first it was just playtime.

What is your biggest extravagance with the money you've been earning?

Actually, I spend a lot of time at the movies—I feel like I just live there. I also like music, learning to play instruments. I've taught myself to play the piano and guitar and I like to write a lot too. But I can't think of anything I like to do more than making movies and watching them.

Percy Jackson and the Lightning Thief opens February 12 (Friday) in theaters nationwide in the Philippines. from 20th Century Fox to be distributed by Warner Bros.