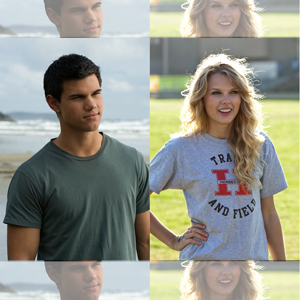 Seen through the eyes of a multigenerational cast of characters, Valentine's Day threads its way through a variety of relationships-from first dates to longtime commitments, from young crushes to old flames, and from perpetual singles to unrequited loves.

"It's amazing to be a part of something with so many names I've admired, but my favorite name has to be Gary Marshall," says Taylor Swift. "I was so excited to get to work with him. He's charming and funny, and he obviously knows how to make a great movie. And he took the time and effort to incorporate our mutual lucky number-13-into every single one of my scenes, which was awesome. I'll never forget that."

Taylor Swift appears as Felicia, a cheery valley girl who is not short on advice for her high school best friends. "If I had to give advice to my girlfriends about Valentine's Day, it would be that if you have a special someone, make a big deal out of the day," Swift offers. "But if you don't, don't psych yourself out; just think of it like any other day."

Felicia has a special someone in her boyfriend, Willy, played by Taylor Lautner. "Willy and Felicia are being interviewed for a news segment about young love on Valentine's Day, and Felicia gets Willy to show off his athletic skills on the track," says Lautner of Willy's ill-fated hurdles run. "It was a lot of fun, but my favorite part was getting to do a complete face plant."

Over Marshall's objections, Lautner did his own stunt-tripping over the final hurdle and landing flat on his face. "He was so brave," Marshall recounts. "I told him we'd get somebody to fall for him, and he said, 'No, I can fall.' I said, 'You're a star. If you fall and get hurt, they'll yell at me.' But he said, 'Let me try it.' I said, 'All right, don't hurt yourself.' I told the stunt coordinator, 'The kid's gonna do it himself...get another camera,'" he laughs. "We had three cameras on him, and he did the stunt beautifully. We didn't need a double. He was terrific."