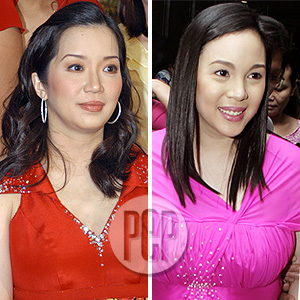 When Kris Aquino (left) and Claudine Barretto were named Box Office Queens for 2006, host Ogie Alcasid declared: "This just shows that the movie industry is back on its feet again."

Claudine Barretto and Kris Aquino were both hailed as the Box Office Queens of 2006 for their top grossing film Sukob. Incidentally, Star Cinema, the movie outfit of ABS-CBN that produced this horror flick, was chosen as the Most Popular Film Producer during the Guillermo Mendoza Memorial Scholarship Foundation Inc.'s 37th Grand Annual Awards and Coronation Night held last night, April 25, at the RCBC Plaza, Makati City.

Her Sukob co-star Kris was unable to attend the event because she is still confined at Makati Medical Center after giving birth to her son, James Jr., last April 19 .

Box Office Entertainment Awards night hosts Ogie Alcasid and Vina Morales led the crowd in singing "Happy Birthday" for "Bossing" Vic, who is celebrating his birthday this weekend with a birthday special on Eat Bulaga and a simple dinner with Pia and his kids.

"Bossing" Vic's casual joke last year became a prophecy. In his acceptance speech back then, he told the crowd, "See you next year!" True enough, he is again named Box Office King, making this his fourth consecutive trophy in the same category. Right after the event, the blockbuster king told his subjects: "Mas kumpleto kung li-lima ito!" Will his offhand remark also turn into prophetic words? We can only wait until next year to find out.

IN A RUSH. In her excitement to give her acceptance speech, Princess of Philippine movies Toni Gonzaga forgot to get her award from the center of the stage and bring it with her to the podium of the Carlos Romulo auditorium. "Excited akong magpasalamat," the actress-TV host says sheepishly about her blunder.

One of the highlights that evening was a special song number between Toni and her onscreen partner, Sam Milby. As they sang the theme song of their Star Cinema romantic comedy, You Are The One, the two were very sweet toward each other. Sam put his arm around Toni's waist and held her hand throughout the duration of the song.

Sam, who was the recipient of the Prince of Philippine Movies trophy that night, was asked what his reaction was to the new guy in Toni's life, Paolo Soriano.

"For me, if he makes her happy, then that makes me happy. I wish her all the best for everything. She's really someone who has touched me. I just want her to be happy."

TARAY AND BAD BOY. Diamond Star Maricel Soriano and Bad Boy of Philippine movies Robin Padilla sat beside each other during the four-hour program. In her acceptance speech, Maricel thanked her legions of fans who came that night. Robin was also nominated for the Box Office King throne but lost to "Bossing" Vic. Still, he won his own trophy for the film Till I Met You, where he acted opposite Regine Velasquez.

Here is the complete list of winners for the 37th Box Office Entertainment Awards of the GMMSF:

The TV coverage of the 37th Grand Annual Awards and Coronation Night will be aired this Saturday, April 29, 9 p.m. at RPN-9.