Romance is in the air When in Rome 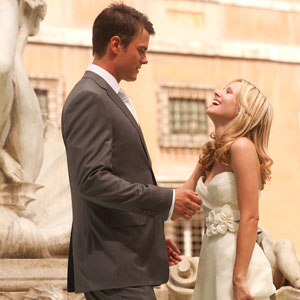 In the movie When in Rome, Kristen Bell's character will find out the consequences of taking a coin from the fountain of love. She gets to meet Josh Duhamel but she has yet to prove if his love is for real or not.

Touchstone Pictures pairs up Kristen Bell (TV's Heroes, Veronica Mars) and Josh Duhamel (Transformers) in the comedy romance When in Rome—the tale of an ambitious young New Yorker (Bell) who is disillusioned with romance. On a whirlwind trip to Rome, she defiantly plucks magic coins from a fountain of love, inexplicably igniting the passion of those who threw them in: a sausage magnate (Danny DeVito), a street magician (Jon Heder), an adoring painter (Will Arnett), and a self-admiring model (Dax Shepard). But when a charming sports reporter (Duhamel), pursues her with equal zest, she's not sure if his love is the real thing.

For director Mark Steven Johnson, who is best known for comic book adaptations like Daredevil and Ghost Rider, a comedy like When in Rome is a bit of a departure. In this movie, jokes the director, "no one's head explodes," but the film is a return to Johnson's roots. "Comedy is where I started—writing Grumpy Old Men—and I really wanted to get back to it."

Johnson, along with producer Gary Foster, recognized the comedy potential of When in Rome. "I'm a guy, and I'm not a big romantic-comedy guy," says the director. "I wanted to make a comedy with romance, versus a 'romantic comedy.' I wanted to make a comedy that was really funny that also had a big heart to it. We had fun with this film, blowing out a lot of the conventions of a traditional romantic comedy."

Producer Andrew Panay came to the project with comedies like Wedding Crashers under his belt; he helped bring that signature sense of humor to this film. "We have a very strong male perspective and a strong female perspective, and you meld it together and get something for everybody," says Panay.

For the film's leading lady, the filmmakers called on Kristen Bell. "Kristen is incredible, an amazing actor," says Johnson. "I have never worked with anyone like her. I really felt like you could build a whole movie around this girl, and it was really exciting."

Josh Duhamel was tapped as Beth's leading man, Nick, whom she meets at the wedding, finds an instant connection, then fears he's under the same spell as the rest of her pursuers.

The unexpectedly awkward quality that Duhamel brought to the character made him that much funnier and more endearing, says producer Panay. "One of Josh's greatest gifts is his ability to be physically funny. He was a college quarterback in real life, so he's very coordinated. But to watch him scramble, fall and run into things—it's absolutely, incredibly funny. And he's so natural."

Opening soon across the Philippines, When in Rome is distributed by Walt Disney Studios Motion Pictures International.