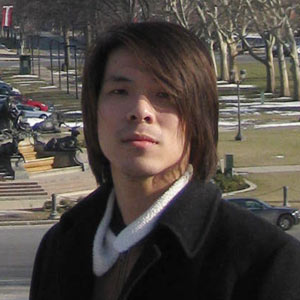 27-year-old filmmaker Ian Loreños will direct The Leaving, a film that will show how "Tsinoys" (Filipino-Chinese) struggle with the demise of their culture.

Ang kanyang mga paboritong pelikula ay ang Der Himmel Über Berlin (Wings of Desire), Memories of Murder, Paris Texas, among others. Mahilig rin siya sa classical music na gawa nina Beethoven, Debussy, at Bach and Mozart. "I also love Philip Glass's genius compositions. I idolize Bono and the rest of U2 and what they are doing to save the world...and of course I love their music. Right now I'm into chiptunes (8-bit musics)."

Everything is changing, leaving, and returning. There is always a constant transience in this world. This is the premise of The Leaving, a raw representation of the social, moral, and cultural scenario of the new generation of "Tsinoys."

The Leaving is set in a neo-Chinatown in Manila where the "Tsinoys" (Filipino-Chinese) struggle with the diminishing of their culture. We follow three intertwining stories (MARTIN, The LOVER, WIFE) that leave elements on the other stories such that they are all connected.

The Leaving - Martin: Martin is living independently in an old apartment building in the center of the Tsinoy community in Binondo, Manila. When he suddenly got laid off from his job as a call center agent, he suddenly caught up in a dilemma whether to leave his home country to reunite with his family in a foreign land or stay and continue his struggles. Martin tries to visit the places as he collects memories of his past to find answers. But the sudden strange encounters during the Chinese Hungry Ghost Festival gives him something more than what he's asking for.

The Leaving - The Lover: A Tsinoy businessman, William (The Lover) is already married but finds his happiness with Joan, a charming, nomadic bachelorette office worker. But the uncertainty in their relationship causes Joan to decide to leave the country to start a new life on her own. But as Joan is about to leave, her departure is halted and results in an unexpected event.

The Living - Wife: A typical conservative Filipina-Chinese housewife, Grace moves in the apartment building with her husband in same building where Martin lives. Neglected and unappreciated, Grace finds comfort through his neighbor Martin but their relationship is fenced by their present circumstances. And so Grace tries live on with her marriage, but a sudden haunting later on unravels a horrifying secret.

All beings exist to find permanence in this world. But it seems to be the most grounded are the ones do not really exist at all.

"I still feel surreal about the 'director' thing. I still can't get into the reality of me being a will-be-director. Everything seems so sudden. A few years back, I was still writing this script that no one cared about and now I'll be directing it and everyone of my close friends are excited about it.

"It just feels so strange. Writing and revising the script already felt like a daily routine to me, letting go of it feels uncomfortable. It feels like filming it was never part of the plan or maybe I'm just startled with the agony of the overall process.

"Being called a director was just a dream. Filmmaking was just an aspiration. It's weird that people call me "Direk" or "Direk Ian." The funny thing is that people sometimes make strange comments about me especially when I informed them about my great news on filming my script. Especially to those whom I haven't seen in a while.

"They will make those strange comments like: 'Wow congratulations! That's why you look like a director now.' Look like a director? What does that mean?! I don't go around bringing a director's chair and a megaphone with me, I also don't wear sunglasses with a beret on my head and got a long hair and mustache.

"So what makes me look like a director?! Actually I wasn't offended by it at all but I must say I'm not a big fan of the stereotypical artist/filmmaker look. I mean, people got this idea of an artist look (long haired guy who got glasses, goatee and never took a bath) I mean we can do great films even though we don't have a ponytail and a goatee. We don't have to frame everyone using our hands in order to look like I'm creating a shot on everything. I mean it's just not me.

"I still love wearing what I want and where I'm comfortable with. Being a filmmaker can only be seen on the films you made. If you've never done any film, you're not a filmmaker, period. And not on how you look like one.

"Maybe, that's the beauty about filmmaking. It's an art form where we need to spend lots of effort, discipline, and an ocean of thoughts. That's why it is yet to become a mainstream 'rock and roll' thing, like the DSLR frenzy where rich folks call themselves photographers just because they got the money to spend on expensive camera equipments and accessories.

"And because of the digital thing, taking pictures became easier than making pancakes. But sorry, not in filmmaking," mahabang salaysay ni Direk Ian.

Production Staff of The Leaving:

As of press time, to be announced pa ang Production Designer at Editor.