Harrison Ford is an eccentric doctor in Extraordinary Measures 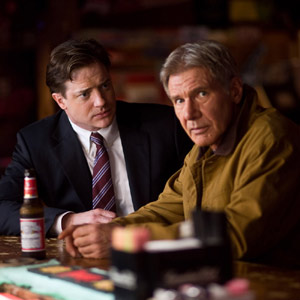 Harrison Ford stars in Columbia Pictures' new medical thriller Extraordinary Measures as Dr. Robert Stonehill, a brilliant but unappreciated and unconventional scientist who teams up with John Crowley (Brendan Fraser), the father of two children diagnosed with a fatal disease to find the cure.

Six years ago, Ford read Pulitzer Prize-winning writer Geeta Anand's Wall Street Journal article, and later Anand's book titled The Cure: How a Father Raised $100 Million - and Bucked the Medical Establishment - in a Quest to Save His Children, on John Crowley and the Crowley family. Captivated by multiple themes, Ford recognized the makings of a movie in this compelling material.

"I thought Geeta's book had something to say about personal courage, initiative, parents' love, and the power to overcome extraordinarily difficult circumstances," remembers Ford. "If we could wrestle this into the shape of a movie, we would be bringing a story to the screen which would enrich people's lives."

Compressing the story's timeline of events included assessing how to best represent the numerous people who assisted John in his development of the drug that would save his children. "There were many people who helped John along the way, from scientists to businessmen. And there were a number of doctors for whom John raised money," explains screenwriter Robert Nelson Jacobs. "We composited all of these people into one character—Dr. Robert Stonehill. John is very 'straight ahead,' and Dr. Stonehill marches to the beat of his own drum. I realized that putting the two of them together would make sparks fly. It would create a lot of dramatic tension."

Ford (who both stars and serves as executive producer on the film) saw Dr. Stonehill as an intriguing opportunity both in storytelling and as an actor. "He's a composite of people who played different parts in the Crowleys' story but, for me, he's also a composite of things I've observed in my research. He represents aspects of a scientist, and also aspects of a loner, an iconoclast," explains Ford. "And his relationship with John Crowley is an interesting kind of relationship for me as an actor. Their relationship is sometimes contentious, not at all smooth, but there are also moments of co-joined purpose. It's a complicated dynamic."

"It's two men with a mission; one to save his family, the other to prove he's right," elaborates producer Michael Shamberg. "Two men against the system; I don't think you can go wrong when you have underdogs fighting for something right. And, given the current health care debate, the public seems particularly primed to root for characters who take control of important issues, such as this one, that affect the fate of their loved ones."

To build Stonehill's character while authenticating the science in the script overall, Ford and Jacobs turned to experts in the field for help and credibility.

"I've been gratified by the willingness of the science community to help us work out ways to get the story more correct on a scientific level," says Ford. "In particular, to work out a way of representing the scientific process which is largely practiced in the head."