Ben and Sam will open Queer Lovefest at IndieSine 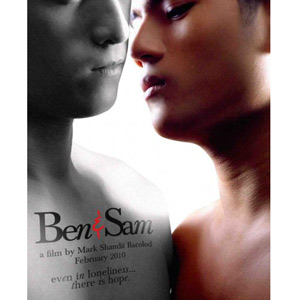 Mark Shandii Bacolod directs Ben and Sam, the opening film of the Queer Lovefest that will run from February 17-23 at IndieSine, Robinsons Galleria.

"I have always wanted to direct the 'perfect' gay film," simula ni Direk Shandii (as he's called). "The perfect same sex love story that is. Boy meets Boy. Boy falls in love. They live happily ever after. I wanted to get out of the box in telling this story. Get out of the conventional pre-conceived notion and stereotype portrayal of homosexuals in cinema today.

"Love in its very essence is the main reason of living. Love is stronger than death. When it strikes you... it strikes you, no explanations needed, no reasons at all. Ben and Sam takes us to a journey of unconditional love, friendship, self discovery and acceptance. The perfect love, at the wrong place, at the wrong time.

"Is it too much for me to show that homosexuals are just like men and women? We get hurt. We struggle. We fight to survive. We fall in love. We feel pain. We even get lonely at night. And we dream of a happy ending to our so-called 'perfect love story.'"

"I gave him the detailed story line and treatment and he wrote the script for me. I entrusted him a very personal belonging. Jazmin became my producer. And we found a love story along the way. Die hard fan ako ng Romeo and Juliet ni William Shakespeare. Gusto ko 'yung so-called Shakespearean tragedy sa film ko.


"Love. Ben and Sam is about this strong-universal word. As my major characters represent loneliness in all its essence, love teaches us that even in loneliness, there is hope. And that in the end, love is the only thing that matters.

"As for all the Bens and Sams out there, don't be afraid to love!" sambit ni Direk Shandii.

SYNOPSIS. What could be more tender and passionate than a love that is found during the times of unfathomable longing? At times when everything is unreal, superficial, and uncertain—if love is genuine, it will cross boundaries and will know no limits and sexual categories. But how does unconventional love carry on in the modern world where patterns of morality are still as ironically primeval as the people who creep around it?

Ben (RAY AN DULAY) is a college student who seems to be the most popular guy in campus. He lives a very luxurious life. And everything seems to be perfect and grand. Not really. He has never recovered from the horrors of his childhood under the hands of an abusive father (TONY LAPENA).

His mother (ANA ABAD SANTOS) has never recovered from his father's loss and is now suffering from an acute case of post-traumatic stress disorder—making her slowly lose her sanity. Aside from this dilemma, Ben has yet to face the greatest of it all—accepting who he really is and fighting for the person he really loves.

Sam (JESS MENDOZA) is the new guy in campus. He has transferred from the province carrying with him the burden of a painful past: his boyfriend who is a student activist was killed. All through out, he shares everything that is happening to him to a mysterious caller.

Ben is athletic. Sam is artistic. Ben is sad. And so is Sam. Ben is committed. Sam is waiting. The first kiss will reverse how their old world turns. The second kiss will stop their new found world from turning.

Everything would seem to be perfect and gay. But not for long. Suddenly, they will become infamous. The butts of the jokes in the campus: Campus Queers. George (MICAH MUNOZ), who is Ben's best friend, is secretly jealous of everything that Ben has: his girlfriend (TARA CABAERO), his popularity, his otherwise charmed life—until he discovers that Ben is someone he doesn't really like. They may never have a gay ending.

DIRECTOR'S PROFILE. Mark Shandii Bacolod is a member of ABS-CBN's Writers Circle Batch 1, which was trained by Ricardo Lee and ABS-CBN Head writer-Director Dado Lumibao. He was a writer for television for more than 3 years with shows like Mangarap Ka, Vietnam Rose, Entertainment Konek, PBB Season 1 and PBB Celebrity Edition Season 1.

He wrote and directed some stage plays during college. Shandii started his writing with poems, haikus and essays before penning stage plays and teleseryes.


Today, he is a full time filmmaker. He was named one of San Miguel Beer's Freshest Filmmakers of 2006. In 2007, he directed The Vizconde Massacre episode of GMA-7's Case Unclosed hosted by Kara David.

In 2008, he directed Charlotte Dianco's Fidel, a semi-finalist in Cinemalaya 2007. Fidel was the Official Selection at the first Filipino International Film Festival Los Angeles and shown at Robinsons Galleria last January.

His second directorial film is a short film titled 5 Minutes, an official selection at the 5th Titus Brandsma Indie Short Film Festival. His film Panahon Na (The Time Is Now) wherein he worked as the associate director and line producer already premiered in Boston last year and had its Philippine premiere at the 11th Cinemanila International Film Festival.


Aside from directing films, Shandii has taken on a number of roles in the filmmaking industry. His film credits include Aloy Adlawan's Signos as Assistant Director. The film became Best Foreign Film in the Lone Star International Film Festival in Forthworth, Texas and winner of Excellence Award in California 2007.

He is the production manager of Sigrid Andrea Bernardo and Bong Ramos's Haw Ang. Shandii is also a full-time casting director and a part-time actor. His TV appearances include Mangarap Ka, Ysabella and an MRT Commercial. Film appearances include Mudraks, Roomboy, and Xenoa 2: Clash of the Bloods (as production designer and assistant director).

Now, he is also busy line producing an action-packed digital film titled 4 To 5, directed by first-time directors Dan and Brandon Relucio. When not making films, he is directing events, music video and audio-visual presentations.

He has been working for at least one film for the CCP-sponsored film festival since its inception in 2005. In the first edition of Cinemalaya, he was cast in Aloy Adlawan's Roomboy. The year after, he worked on two entries--Dado Lumibao's In Da Red Korner (as production manager and assistant director) and Arah Jell Badayos and Margaret Guzman's Mudraks (as production manager).

100 also won the Audience Choice Award at the Pusan International Film Festival of that year. Boses and 100 together with Ploning were honored as Best Pictures at The Gawad Tanglaw. Boses bagged 5 major awards at Golden Screen Awards including Best Motion Picture-Drama; and Concerto won Best Production Design and Best Adapted Screenplay. Concerto and Boses also won some awards in the PMPC Star Awards for Movies.


In Cinemalaya 2009, Shandii was assistant director to Alvin Yapan's Ang Panggagahasa Kay Fe (The Rapture of Fe). It bagged the Special Jury Prize award for Best Picture together with Colorum and won the Golden Award at the Cairo International Film Festival 2009.

Last year, Shandii was associate director of Maximus and Minimus, directed by Nap Jamir II, official entry to the Cinema One Originals Film Festival. This year, he's an actor in Han Salazar's Fling.