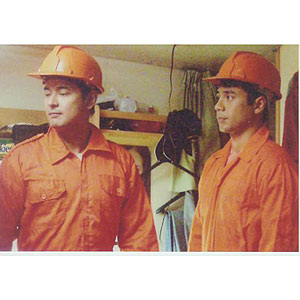 Allen Dizon (left) portrays Benjo Maglipon, the protogonist in the film Marino (Call of the Sea), while Rico Barrera (right) is cast as a closet homosexual seafarer.

For many Filipino seafarers, they have to struggle with loneliness and homesickness for months on end just to earn enough for their families. A film that aims to depict the hurdles being faced by seafarers and the families they leave behind will be screened in select theaters including SM Cinemas starting February 17, 2010.

Marino is topbilled by Allen Dizon, Ara Mina who is Allen's wife in the film, Krista Ranillo who is cast as Allen's mistress and Bangs Garcia who plays his ex-girlfriend. It is written and directed by Ateneo graduate and Cinemalaya alumnus Paul Sta. Ana. The film is produced by CDP Events & Entertainment Production in cooperation with ATD Entertainment Productions.

SYNOPSIS. Marino is a film that aims to shed light on the sacrifices and triumphs brought about by overseas employment, particularly those experienced by seafarers.

Benjo (Allen Dizon) is a 30-year-old husband and father who has been working as a seaman for the past seven years. As a seafarer, he has had to deal with sea pirates, sunken ships, sexually transmitted diseases, and even homosexuality.


Benjo's bunkmate gets into a brutal accident. Another seaman struggles with his sexual identity while another seaman reminds Benjo of his happy-go-lucky brother who became a single dad too soon. Despite their differences, these seamen develop bonds of friendships while living together onboard.

After several months on his most recent voyage in the ship, Benjo gets an emergency call from his wife, Mina, who informs him that her ill father just passed away. Deeply affected by the death of his father-in-law who was like a second father to him, Benjo sadly informs his wife that he can't come back for his father-in-law's funeral. He then reminds his wife about the sacrifices that he made for his family.

Marino is a film that focuses on the individual lives of a seafarer husband and a grieving wife, separated by physical distance, learning to cope with their situation-a circumstance that is happening to OFWs everywhere. This film also hopes to show maritime students how challenging the lives of seafarers are so they can be prepared for the tough task ahead of them.