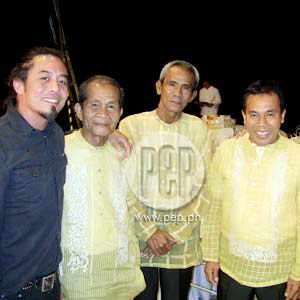 In the past, Filipino bachelors were expected to sing under a girl's window at night to capture her heart. During those times, no courtship is complete without a guy and his barkada strumming a few chords on an acoustic guitar while belting a heartfelt love song.

This forgotten Filipino tradition is the focus of the documentary film Harana. Benito Bautista, the film's director, shot the finale of his indie movie at Dolphy Theatre inside ABS-CBN last Friday, February 12, and received positive feedback from the audience.

PEP (Philippine Entertainment Portal) had a chance to chat with the San Francisco-based director after the shoot.

MAKING THE FILM. "Harana documentary film is a little bit of a personal story about internal conflict, disconnection, and then later on, a search for master haranistas," said Bautista. "We're creating a legacy of a dying art form."

According to the 46-year old director, it was the film's lead character, musician Florante Aguilar, who approached him to do the film.

Harana is about Aguilar's journey to the Philippines from the United States in his search to find the best haranista, or a master of harana, in the country.

But 13 years later, Aguilar had to come back to the Philippines to bury his father. It was at this time when he learned to love Filipino music.

"When he went home, during his father's wake, he saw the same rondalla teachers that taught him how to play guitar, that inspired him. That's when he realized that there's a connection with him and Philippine music," narrated Bautista.

Back in the States, Aguilar continued studying Philippine music, until he realized he had to record old harana songs before it disappears.

Aguilar's journey is what Bautista has captured on tape.

LOOKING FOR FUNDS. Aguilar said one of the hardships in making Harana was the constant hunt for funding.

Based on the preview showed during the ABS-CBN shoot, Harana has potential to take part in the prestigious Sundance film festival and other film festivals worldwided. But the film could only be finished in July if there will be funds for it.

"You know private people that get to know us, then follow us, and before you know it, they believe in the project and they invest in the project. And that's really what's important to us, because it's a global film. This film is not intended for Filipinos only because the theme of romance, serenading and internal conflict and disconnection are universal. It's a story of love, romance, serenading... but if you present it in global terms... I mean a person in France will appreciate what we do," he explained.

MASTER HARANISTAS. But so far, Bautista said the journey is worth it. They found three haranistas, namely Felipe Alonzo, Celestino Aniel, and Romeo Bergunio.

Part of the film were shot during the master haranistas' live performances in several venues. Since last year, the three have joined Florante Aguilar in serenading members of high society at the Cultural Center of the Philippines, the poor children of Silang, Cavite, and foreign guests of ABS-CBN.

Bautista said the three, who initially were reluctant to perform in front of cameras and on the stage, definitely deserve attention.

"What's amazing is that you have a well-to-do crowd sitting down, and the humble commoners on stage. Ni-reverse mo yung situation no?" he said.

The positive response they gain from the harana performances must be an indication of the need to preserve the music, Bautista said. Aside from releasing his indie film Harana, he also plans to release a recording of forgotten harana songs.

"Kasi if these guys die, wala nang susunod. So we're going to record them and immortalize them. So that the next generation will realize that there was once a time when romance fluorished through harana," explained Bautista.

Hopefully, the documentary Harana will make Filipinos realize that there is beauty in harana and that there is a need to preserve it, no matter how outdated it may seem to be.