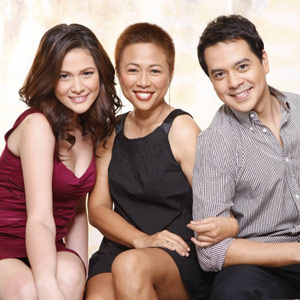 "It's kinda different story. It's not the plot that it's different. Sabi nga namin, ang love story naman ay iisa lang naman, universal truth 'yan, but it's how you tell it," director Cathy Garcia-Molina (center) said about her upcoming movie Miss You Like Crazy. Bea Alonzo (left) and John Lloyd Cruz will be reunited in this Star Cinema film that will open on February 24.

Almost three years after their last movie together, John Lloyd Cruz and Bea Alonzo are once again reunited with director Cathy Garcia-Molina in the movie Miss You Like Crazy.

The three of them previously collaborated for the romantic movie One More Chance, which earned for John Lloyd and Bea the Box Office King and Queen titles at the 38th Box Office Entertainment Awards of the Guillermo Mendoza Memorial Scholarship Foundation. The same award-giving body hailed Direk Cathy as the "most popular film director."

Since their last movie together was really a hit, Direk Cathy admitted that this added pressure for them to do well in their upcoming movie.

She added, "Ayaw na naming maisaisip na ma-pressure kami sa ganun kasi baka makita sa pelikula na nagpipilit kami. What we did was... maybe this is just another love story but a different one. We will sell it the best way we can and hopefully, you'll like it."

A DIFFERENT LOVE STORY. Since John Lloyd, Bea, and Direk Cathy come from a well-loved movie, some people are expecting that Miss You Like Crazy would also be similar to One More Chance.

Direk Cathy warned that it wouldn't be the usual romantic-comedy film that starred Bea and John Lloyd, "neither it is like a One More Chance," she stressed.

She described the movie by saying, "It is something new, not even a combination of both. It's something that we'd like to try. Sana magustuhan ng mga tao. It's kinda different story. It's not the plot that it's different. Sabi nga namin, ang love story naman ay iisa lang naman, universal truth 'yan, but it's how you tell it. The characters that are part of the story and the way you tell the story, medyo iba. So, sana magustuhan nila."

In this movie, John Lloyd plays the role of Allan, a guy who is torn between his longtime girlfriend (Maricar Reyes) and a girl (Bea) he just met during a trip to Malaysia.

John Lloyd said that viewers could easily relate to the story of Miss You Like Crazy. He even admitted, "'Yong character ni Allan, napagdaanan ko na 'to."

Aside from the story, Direk Cathy also said that the viewers should watch for the love scene of Bea and John Lloyd in this movie. "Definitely, kailangan nating umakyat from One More Chance. Noon, di ba, ibang klaseng love scene. Ito, ibang intention dito ng love scene," she related.

She also gladly accepted the responsibility of helming the sensitive scene of the two stars. "They trust me enough and they trust each other enough. I'm so happy na sila po talaga ay nagsusuportahan din sa isa't isa that they were able to make it without any hesitation and apprehension. So, maganda po ang lumabas na love scene. Sana po sa paningin ninyo maganda rin."


The film was shot in the Philippines and Malaysia and carries Eric Santos' soulful rendition of the '90s hit song "Miss You Like Crazy" as its official movie theme song.

Don't miss the chance to see John Lloyd and Bea together again in Miss You Like Crazy, which will open in cinemas nationwide starting February 24. This Star Cinema film will have its premiere night on February 23 at SM Megamall.