BEHIND THE SCENES: Miss You Like Crazy in Kuala Lumpur, Malaysia 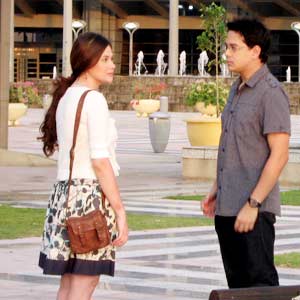 Bea Alonzo and John Lloyd Cruz shot this scene for Miss You Like Crazy in front of the Ministry of Finance, Putrajaya, Kuala Lumpur, Malaysia.

On February 24, the on-screen love team of Bea Alonzo and John Lloyd Cruz will once again make viewers fall in love again via Star Cinema's post-Valentine offering, Miss You Like Crazy.

The lead stars of the film taped key scenes of the movie in Kuala Lumpur, Malaysia. The Asian city served as a beautiful backdrop to most of the movie's romantic highlights, with the famous Petronas Twin Towers playing a significant role in the story as an idyllic symbol to the star-crossed lovers' quest for a similar picture of happiness in companionship and love.

In Malaysia, John Lloyd and Bea were able to truly appreciate the beauty of the prominent landmark by seeing it at its best angle from the Titiwangsa Park. But John Lloyd believes that finding the right person at the right moment could be just as perfect at any given place. "Pag tamang lugar at pagkakataon para sa inyong dalawa, tingin ko kahit nasaang parte ka pa ng mundo naroron, kahit ano'ng klaseng lugar pa yan, gaganda."

Malaysia also proved more beautiful for John Lloyd and Bea because of the warm welcome given to them by the people they met there. In fact, the love team has a solid fan base in the country. "Magugulat ka kasi marunong silang mag-Tagalog," observes the young actor. "Kapapanood daw nila ng mga teleserye natin. Very affectionate sila."

Malaysian LaBers, or Lloydie and Bea lovers, actually prepared streamers to welcome the love team in their country. Zana of Pajang first saw the couple in the 2003 film It Might Be You. Since then, she has been an avid fan of Bea and John Lloyd's TV shows such as Ikaw Ang Lahat sa Akin and Kay Tagal Kitang Hinintay. Piza of Kuala Lumpur also became a fan of John Lloyd and Bea because of their good chemistry and acting abilities.

Another Malaysian LaBer, Rizi, is genuinely excited to learn about their idols reunion on the big screen. "But obviously, we don't think it will come out here in Malaysia," she states, clearly disappointed. She just hopes that LaBers in the Philippines would give their idols the support they won't be able to provide John Lloyd and Bea for this new film.

Even Miss You Like Crazy's director, Cathy Garcia-Molina, was surprised to discover how popular his lead stars are in Malaysia. "We were surprised when we got to the Kuala Lumpur airport, may banner ang Miss You Like Crazy! Natuwa kami kasi may suot na tudong, mga Malaysians ang fans nila JL at Bea! We're so happy kasi sa Malaysia hindi uso ang tinitilian ang mga artista. Sina John Lloyd at Bea natin, natilian sa Malaysia."

According to Direk Cathy, even Hans Isaac, a famous Malaysian actor who is also part of the Star Cinema film got screams from local fans. She pointed out that Filipino moviegoers should take note of the actor's portrayal of the character of Amir in the movie. "Magaling siya," says Direk Cathy, "Very natural."

Filming in Malaysia posed a big hurdle for the film's director. "Sanay tayo sa Pilipinas na medyo spoiled. Maraming ilaw, maraming tao, marami kang staff, may crew." In Malaysia, she said they had to contend with a lean film crew. "From 40 people, we were down to 12. Three roles rolled into one. Thankfully," she said, her staff members remained supportive and never complained. "Kahit konti lang tulog namin, okay lang kasi mahal namin ang pelikulang ito." The director is also confident that the fans of John Lloyd and Bea will love her movie just as much, promising them a whole new level of drama as their idols portray Allan and Mia in this film.

Miss You Like Crazy is also the first movie of Star Magic talent Maricar Reyes. Erik Santos sings the movie's theme song, which became an international hit in the '90s.