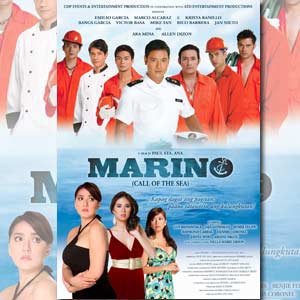 THE PLOT: Marino, director Paul Sta. Ana's sophomore effort after Huling Pasada (Cinemalaya 2008 finalist), dramatizes the longing that devours a couple when one decides to work as a seafarer.

Following the diaspora of Filipino workers, Benjo (Allen Dizon) leaves his wife and daughter behind to become a seaman. He tries to overcome separation anxiety by watching family home videos over and over again. However, pixelated images cannot cure homesickness, only human warmth will suffice. And so, he commits an unfaithful act that puts his devotion to his wife to the test.

Back home, his wife Mina (Ara Mina) is dealing with her father's failing health. As she copes with the situation, she starts to doubt her feelings for her husband. Will she wave the white flag or will she hold on to their commitment?

THE VERDICT: It's too bad that director Paul Sta. Ana and screenplay writer Dennis Evangelista overpopulated this story with too many characters. Is this bad habit talking? Or are the filmmakers just too keen on putting celebrities on screen regardless if their characters are significant or not?

In indie film standards, we can say that Marino has an all-star cast that includes Allen Dizon, Ara Mina, Emilio Garcia, Victor Basa, Rico Barrera, Marco Alcaraz, Jan Nieto, Krista Ranillo, Bangs Garcia, Mike Tan, Jaja Gonzales, Raymond Cabral, and Benjie Felipe. And so, the film haphazardly jumps from one character's conflict to the next in order to parade its bevy of stars. We are introduced to numerous characters that aren't given enough screen time to fully matter.

There was practically no character development and dramatic buildup. They were merely concerned on giving each actor and actress their fair share of the limelight. In fact, some of the characters are disposed at a whim. A perfect example is Emilio Garcia's character. On the get-go, he is fashioned as the major supporting player. He is Benjo's constant companion, confidante, and kumpare. He offers insightful advice and provocative discussions about being a seaman and a faithful husband. But after his character meets an accident, we never heard of him again.

Meanwhile, the homosexual affair between the characters of Rico Barrera and Raymond Cabral doesn't contribute much to the central themes being explored. But the scenes are there anyway, probably because the filmmakers think they would appeal to a particular demographic. Moreover, the roles of Bangs Garcia (Benjo's ex-girlfriend), Marco Alcaraz (neighbor who secretly desires Mina), and Jan Nieto (Mina's older brother) are somewhat superfluous.


One scene that stood out in Marino is the tearful confession of Mike Tan's character. He admits to his mother that he once again flunked the board exam for seamen. Minimal dialogue was used but one can feel the son's contrition as he unabashedly shed tears and promised to help his mother earn a living here in the Philippines. Too bad there weren't many other scenes like that in this indie film--simple yet effective.

Despite its shortcomings in the storyline department, the production values can be compared to mainstream releases. They even shot some scenes in Thailand. Marino boasts of clear cinematography, decent production design (although it lacks authenticity), heavy musical score, and a heartrending theme song. Jan Nieto lends his vocals to the ballad "Bakit Kailangan Pang Lumayo?" penned by Ogie Alcasid.