PEP REVIEW: The Red Shoes unearths the Imelda Marcos in all of us 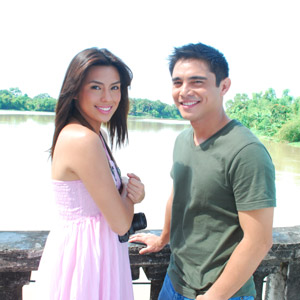 Marvin Agustin and Nikki Gil topbill The Red Shoes, a Unitel production that will be screened in theaters nationwide starting March 10.

Imelda Marcos, the iconic First Lady of the Martial Law regime, is known for her flamboyant antics as much as her love affair with footwear. In fact, her extravagant shoe collection of 3,000 pairs landed her a spot in the Guinness Book of Records. One pair of shoes becomes the star of the first film of Unitel Productions in more than three years. This marks the film outfit's return to movie production after creating the critically-acclaimed films Inang Yaya, Santa Santita, and Crying Ladies.

The Red Shoes sidesteps from featuring the Steel Butterfly's larger-than-life persona. It refuses to sensationalize Imelda or depict her in a bad light. Instead, the film gives us a parallel story about stealing in the name of love using a pair of red shoes as a metaphor. When Malacañang was first opened to the public after the People Power Revolution, Lucas (Marvin Agustin) was one of the first to enter the President's official residence. He couldn't believe his eyes when he saw the First Lady's infamous shoe collection. He stole a pair of red shoes and gave one shoe each to the "first ladies" of his life—his sweetheart Bettina (Nikki Gil) and his mom Chat (Liza Lorena).

Aside from the story of the red shoes, the film has other shoe stories to tell. The film shows the affinity of the different characters with their favorite shoe color and how that reflects their personality and perspective in life. Lucas likes to wear white sneakers, white Chucks, white sandals, anything white. He refuses to wear any other color. He also refuses to change and get out of his comfort zone. He clings on to his past dearly with no intention of moving on.

Meanwhile, Chat owns dozens of shoes but she doesn't have a favorite pair or a favorite color. She is still looking... in the same way that she is still looking for answers why her beloved husband Domingo (Tirso Cruz) was suddenly claimed by the afterlife. Her husband was one of the unfortunate workers who got buried in quick drying cement when the scaffolding of the Manila Film Center collapsed in 1981. Since his death, Chat has been trying to contact him through psychics and mediums. Her remaining hope is Madam Vange (Tessie Tomas), a crazed Imelda fanatic believed to be a powerful medium.

Aside from the focal stories of romance and family drama, The Red Shoes boasts of a rich back story as well. Scribe James Ladioray uses nonfiction elements from the Martial Law years as turning points of his story like the collapse of Manila Film Center and ousting of President Ferdinand Marcos, thus making the story more believable and relatable.

This film may seem like Pinoy's answer to 500 Days of Summer. But comparing it to the Zooey Deschanel and Joseph Gordon-Levitt rom com means we are disregarding the film's political connotations and merely appreciating its cutesy, quirky ways.


The film poses the question: would you steal for love? Even though Lucas has the purest intentions, he still committed an unlawful act. The filmmakers may be drawing a parallelism with what Ferdinand did to please the insatiable Imelda, but don't quote me on that. Whether or not,director Raul Jorolan and writer James Ladioray have that intention is up to the viewers to interpret. The best thing about watching movies like this is that it leaves us with something to ponder on. It's not just escapist entertainment that gets pushed at the back of our minds after the end credits rolled.

When I first heard about The Red Shoes, I got instantly hooked by its premise. Its tagline is quite catchy: The film promises to be "a love story about a pair like no other." A lot of films only look good on paper, but not this one. The high-flying concept, coupled with a commendable execution, gave us the first great Pinoy movie of 2010. Its screenplay is highly original, clever, and eloquent. It isn't just a love story. It isn't just a shoe story. It is every Filipino's story. There is a Ferdinand Marcos and an Imelda Marcos in all of us.