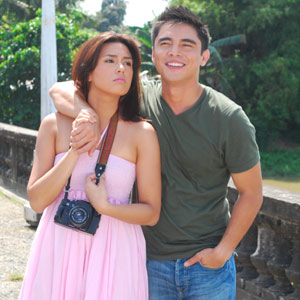 "The story unfolds through three decades as we tell Lucas' story," says director Raul Jorolan about his film The Red Shoes. "Young, resolute and in love, there is nothing that will stop him from pursuing his goals—not even committing an act amidst the chaos and confusion of the 1986 People Power revolution—all in the name of love." Starring Marvin Agustin and Nikki Gil, this movie will be screened in cinemas starting

During a press conference for Cinemalaya 2007, PEP (Philippine Entertainment Portal) was able to get a list of the films that were supposed to be produced that year. One of the finalists was the entry titled 2,999 and it told the story of a missing pair of shoes from Imelda Marcos's collection. Unfortunately, the filmmakers were unable to finish the entry on time so they decided to pull out from the third edition of the film fest.

This 2010, that story of the missing pair of shoes will finally be told on the big screen under the new title The Red Shoes.

Starring Marvin Agustin and Nikki Gil, this movie will be screened in cinemas starting March 10. It will have a premiere night at SM Megamall for the benefit of the Philippine Red Cross this Saturday, March 6.

In 1986, the ten-year old Lucas Munozca was able enter Malacañang Palace in the evening of the People Power Revolution. When he catches sight of the First Lady's 3000 pairs of shoes, he steals a lovely red pair. He gives one shoe to his childhood sweetheart Bettina, while he gives the other to his mother.

In 2006, Lucas (Marvin Agustin) is now working as a professional wedding videographer. He is stuck with one kind of footwear: white sneakers. He too, is stuck with his past, unable to move on from losing the love of his life Bettina (Nikki Gil). Just like Lucas, his mother Chat (Liza Lorena) is also stuck in the past. After all these years, she still grieves the loss of her husband, Lucas' father, Domingo (Tirso Cruz III). Domingo perished along with an untold number of workers during the collapse of an upper floor of the Manila Film Center in 1981, a pet project of the then First Lady Imelda Marcos.

When his mother suddenly needs the complete pair, Lucas is forced to confront the consequences of stealing the shoes and to reveal why he did it: for poetic justice and for love.

FROM CINEMALAYA TO UNITEL. During the press preview of the film at the Podium in Mandaluyong City last February 26, scriptwriter James Ladioray discussed with PEP how he and director Raul Jorolan were able to finally finish this touching love story.

Why did they cast Marvin and Nikki for the roles of Lucas and Bettina?

James then pointed out: "My wife kasi is really taller than me so [this film] was inspired by that. I wanted to create a film that would touch lahat ng may kinalaman sa sapatos...may sapatos na nanakaw at may iba't ibang personalities na attached sa sapatos. Si Liza Lorena hindi maka move on, Iwa Moto wants to fill in the shoes of someone else."

How did he come up with this concept?

"When I started traveling after college, pag nalaman na Filipino ako, maraming nagtatanong sa akin about Imelda [the former First Lady when Ferdinand Marcos was still incumbent]. Naisip ko pag gagawa ako ng pelikula, kilala nila si Imelda so it would sell internationally," he says. "And I also wanted to do something that is rooted in our history. Here. I tackled People Power and may reference pa kay Jose Rizal."

"Anyone who has ever fallen in love and would want to do something for love will be able to relate to this story."

Is film this based on a true story?

The Red Shoes stars Marvni Agustin, Nikki Gil, Liza Lorena, Tessie Tomas, Iwa Moto, Tetchie Agbayani, Monica Llamas and Tirso Cruz III. It will be screened in cinemas starting March 10. Its premiere night at the SM Megamall this Saturday, March 6, will be for the benefit of the Philippine Red Cross.


CLICK HERE to read PEP's review of this film.