Book of Eli will premiere on March 17 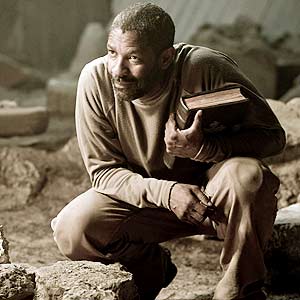 Denzel Washington topbills the action-adventure The Book of Eli, which will premiere in Philippine cinemas on March 17, 2010.

"What we liked about this story was that it was an action adventure but it also had something to say about commitment, sacrifice, survival and human nature," says Allen Hughes, who, with his twin brother, Albert, directed Columbia Pictures' new action-adventure The Book of Eli starring Denzel Washington. It is the fifth feature film for the pair, who made their auspicious debut at age 20 with the powerful and acclaimed inner-city drama Menace II Society.

Says Albert Hughes, "The Book of Eli takes us to a future that is decimated—whether by war, nuclear or natural disasters, or any combination of events, it doesn't matter. The devastation is total and that allowed us to speculate about how the world would look and how people would manage if the whole grid was wiped out and we were thrown back into a primitive way of life. There would be a lot of lawlessness. But, in time, there might be a few brave individuals who would regain a sense of purpose and take up the mantle of leadership."

Eli is one of these few. In a time when people are either hunter or prey, he dares to be a free man, committed only to his belief in what he's doing and his determination to see it through. But the price he pays for following his conscience is harsh. Without respite, without a home...nearly every day brings him into fresh peril and another fight against the forces that would drag him and whatever is left of society into an ever-deeper abyss.

Denzel Washington was so taken with the story that, when initially approached for the title role, he also signed on as a producer. "It's an interesting journey," he acknowledges. "Eli is a man on a mission of great importance that he's been pursuing for a long time. When we meet him, he's nearing the end of it but his greatest tests are still to come."

Exactly who Eli is—where he comes from and where he is going—remains largely, and intentionally, a mystery. Says Allen Hughes, "A character like Eli, the enigmatic lone warrior, is almost mythical. You know there's a rich back story, but it shouldn't be entirely revealed, and Denzel was conscientious about doing little things that would shed light into his past without spelling it out. One of his ideas was for Eli to bear a burn scar on his back as a mark of the catastrophe he has survived. He was very good at painting in those kinds of details that would add to Eli's mystique."

"Denzel really got into the soul of the movie, taking it beyond the adrenalin rush of action," says producer Broderick Johnson. "His performance makes you want to take that walk with him, to be moved by Eli's quest and the obstacles in his way."

Producer Joel Silver, the force behind some of Hollywood's most memorable action films, addresses the character's dual nature. "He has a mission to fulfill. If people try to divert him from it or stop him for any reason, then he will, quite simply, do whatever is necessary to get past them. I think you're inclined to forgive his actions because, at his core, he's an honest and peaceful man, and this mission is the most important thing in the world to him."

"Part of what makes Eli heroic is this focus on the future. He is constantly moving forward," notes producer David Valdes. "I'm a real movie fan. I love the classic struggle of good versus evil, and I especially love to see a hero who believes in the future as much as Eli does. It speaks of hope."

Opening across the Philippines on March 17, The Book of Eli is distributed by Columbia Pictures, local office of Sony Pictures Releasing International.