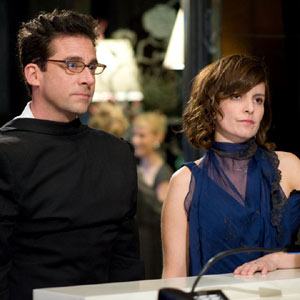 Steve Carell and Tina Fey's characters get involved in a mix-up that leads to a hilarious adventure in Date Night .

Family and kid-friendly filmmaker Shawn Levy who helmed the hits Cheaper by the Dozen and Night at the Museum 1 & 2 writes on his own date nights with a twist in the upcoming for-couples-only movie Date Night starring Steve Carell and Tina Fey.

In Date Night, Carell and Fey portray a suburban married couple who venture into the heart of Manhattan for a romantic date to spice up their relationship. But the unsuspecting Phil (Carell) and Claire (Fey) get more than their fair share of thrills following a case of mistaken identity. Embroiled in the city's criminal underworld, they find themselves on a wild, high-risk, hilarious adventure.

They go to one the city's most fashionable restaurants but the problem is, they don't have a reservation. They impulsively take a table belonging to another couple who haven't turned up for dinner. The Fosters become "The Tripplehorns," which leads to a host of problems that rapidly begin to unravel.

Below is a Q&A with director Levy who gamely shares his own thoughts on married life and date nights.

Can you explain the plot of the film, which sounds intriguing?

Levy: "Phil and Claire Foster go on a special date night into New York City instead of going to their usual local neighborhood joint in New Jersey. They decide to go somewhere fabulous, filled with people who are younger and more beautiful than they are, but they can't get a table.

What kind of trouble do they get involved in?

Levy: "They are chased by dirty, corrupt cops, mafia killers, and various assorted criminals and bad guys. They have to survive and prove that they're not who the bad guys think they are. It all takes place during the course of one night between sundown and dawn. On the other hand, they end up seeing each other in a new light. They each reclaim an appreciation for the person they chose to marry."

Did this film present a major new challenge for you?

Levy: "It did. I certainly feel a comfort in comedy and with visual effects. I definitely feel a comfort in family films, so to do a more adult themed, adult-targeted comedy with a lot of action and a lot of heart was great, and involved using muscles I haven't been using as much. Consequently, it was very stimulating, very interesting and really satisfying."

What kind of couple do Steve and Tina play?

Levy: "This is not a couple at risk. They aren't thinking about breaking up. They are just going through the daily, exhausting grind of parenthood and work. They only have a sliver of time to exercise or do anything for themselves. Often we only have a shred of energy at 10:30 at night to give to our partner. We meet the couple and find out that they love and respect each other, but the passion has faded a little."

Levy: "Well, Tina is certainly the biggest female comic working right now, period. That's a bold claim, but I can't think of any woman working in comedy who is more popular, more admired and frankly more interesting than Tina Fey. The film also has great dramatic scenes, which Tina has not done on her TV show or in her previous movies. So my hope is that the movie introduces audiences both here in the U.S. and internationally, to this new female star who really deserves to be broadly recognized as a great actress."

What makes Steve Carell stand out in your opinion?

Levy: "Steve has a humanity and a relatable honesty that is at once hilarious and heartbreaking. I think it was illustrated in The 40 Year Old Virgin and in the TV show The Office, also in Little Miss Sunshine. He is a great actor and a great comic. His performance in this picture is so touching and honest. The movie just feels true and audiences will relate to him. "

What do you think is the overall theme of the movie?

Levy: "It is about the attention that we must give to our relationships, because over time of course the passion can vanish and no one wants to live that way. It certainly is a reminder to appreciate one's partner. It is also very much a love letter to marriage, to commitment and to partnership."

Shawn Levy graduated from the Drama Department of Yale University. His early films include Just Married and Big Fat Liar. He directed "The Pink Panther" and Cheaper By the Dozen 1 and 2. He produced and directed the original global hits Night at the Museum 1 and 2.

Cancel your appointments and set your Date Night when it opens April 9 (Friday) in theaters nationwide from 20th Century Fox and distributed by Warner Bros.