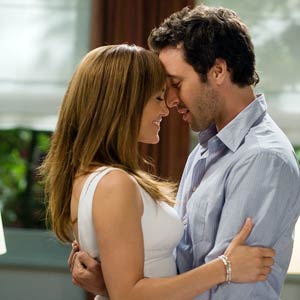 Zoe (Jennifer Lopez) seeks the help of Stan (Alex O'Loughlin) to make her dreams of pregnancy come true in The Back-Up Plan.

In Columbia Pictures' new romantic comedy The Back-Up Plan, Zoe (Jennifer Lopez) has a very full and charmed life. But while staring down her late 30s, she comes to the realization that the one thing that has evaded her, Mr. Right, may never come along. She decides to fulfill her dream to have a family on her own and makes an appointment with a fertility doctor. As luck would have it, mere moments after the procedure she meets Mr. Right.

The arrival of Stan (Alex O'Loughlin), aka Mr. Right, in Zoe's life begins her romantic journey in love, in life, and in labor. He throws her plan off course in a way that has wildly comedic repercussions both due to circumstance as well as their contrasting personalities.

"Zoe is a planner," explains Jennifer Lopez. "She decides it's time to have a baby and she sets out to make that happen. Stan, on the other hand, is much more of a free spirit. He's not living out his dreams (he owns a cheese stand at a NY farmer's market) but he's relaxed into his situation. He's not really thinking about the future, and certainly not looking to be tied down."

Writer Kate Angelo derived the idea for her first feature from witnessing her close friends dealing with thirtysomething female issues. "There is an undeniable biological ticking clock. And, at some point, if you haven't met that right guy by a certain age, you have to consider other options in order to have a family."

"When I read the script, I laughed out loud all the way through which doesn't happen often," recalls director Alan Poul. "And then I cried at the end. I thought to myself 'if I can bring even just 75 percent of that experience to the screen, it's going to be a very satisfying movie.'"

Poul appreciated the script's reflection that society has turned the traditional 'courtship, love, marriage, parenthood' sequence of events on its head in recent years. He was also thrilled that Lopez was going to play Zoe.

The vision was to create a modern romantic comedy. To that end, Poul looked for every opportunity to elevate what he refers to as the material's "cutting edge contemporary comedic voice."

Poul is quick to mention, however, that Angelo's script also has a nice balance of classic romantic comedy elements from which he pulled. Perhaps the most notable is the energy of Zoe and Stan which Poul likens to the famous team of Hepburn and Tracy, whose witty banter and on-camera electricity made the genre iconic. Says Poul, "From the moment Zoe and Stan's worlds collide upon hailing the same cab, it's a classic romantic comedy."

Though Poul found Zoe and Stan's relationship to be "hilariously funny and genuinely romantic," he also looked beyond the two leads for entertainment value.

"He looks for comedy in the background and on the sides, wherever the camera is," says producer Todd Black. "He's always looking beyond the main actors for how he can make people smile watching the whole frame of the movie."

Lopez prides herself on doing her homework before every shoot day. She always strives to be aware of each scene's whole picture, including the beats within the beats, in order to stretch the comedy further. Poul makes a habit of doing the same. Together they were able to mine every scene to the maximum extent. Lopez enjoyed collaborating with the director. "Alan had ideas for each scene I would not have thought of, and vice versa," says Lopez. "Working together allowed us to maximize the value of the material."

Opening soon across the Philippines, The Back-Up Plan is distributed by Columbia Pictures, local office of Sony Pictures Releasing International.