The Losers will open in cinemas on April 23 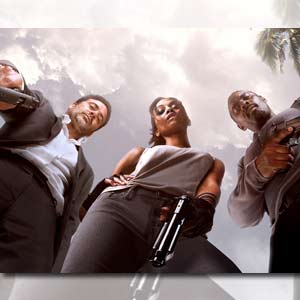 A team of U.S Special Forces operatives are left for dead in the upcoming action-adventure film, The Losers .

From the recent graphic novel based upon the comic books written by Andy Diggle and illustrated by Jock, Warner Bros.' new action-adventure The Losers follows a ragtag but highly skilled team of U.S. Special Forces operatives who get double-crossed and left for dead in the jungles of Bolivia.

"The Losers is the story of six renegades who work for the CIA Special Ops, and they are sent to South America and Bolivia to eliminate an arms dealer, which turns out not to be true," says director Sylvain White. "Unfortunately for them, they are left behind by the government, left for dead, and taking the blame for the deaths of many people, which occurred during the mission. The story basically starts there, as these guys try to find their way back into the U.S. , redeem themselves, prove to the country that they are innocent, and find out who is really responsible for what happened."

A longtime fan of comic books and graphic novels, Sylvain White—who cut his teeth on the street dance film Stomp the Yard—was drawn to the graphic novel's unique tone. "I grew up in France ," he says, "I grew up reading a lot of graphic novels. But the nature of the graphic novels in France is different than in the U.S. The stuff that I grew up with was a little bit more action-adventure-oriented, and The Losers is very much in that vein. There are no super powers; there are no super heroes. They're real guys. They're actually underdogs and they're going through very real trauma, very real adventures and extraordinary situations."

Legendary filmmaker Joel Silver, who produced the Die Hard, Lethal Weapon and Matrix series, calls the comic book roots of the film groundbreaking. "It was just fresh and original," he says. "It didn't look like all the other comic books, and influenced a real aesthetic shift in comics, with bold images and the bold frame lines that Andy and Jock created. And I'm proud that we kept that aesthetic in the movie. And Sylvain definitely brings his own strong visual sense and sense of style. The movie doesn't feel like something you've seen before. And a lot of that was brought about by Sylvain."

Academy Award®-winning screenwriter (I Am Legend) and accomplished producer Akiva Goldsman adds that once the screenplay by Peter Berg (The Rundown) and James Vanderbilt (Zodiac) was in place, White became the ideal match for the material. "Sylvain had made one movie, a dance movie, and yet the dancing in it is very much like martial arts. There was a construct to the dancing, which made it both narratively and filmically quite competitive. And it spoke to a kind of style that he wanted to bring to this movie. And when he presented to us what he wanted to do, we were impressed. Sylvain has a real youthful spirit, but he's also a grownup. He's somebody who has good leadership qualities, and he also has a really good eye and a sense of character and action."

White hopes that fans of the comic book will be entertained by the lives they've taken on the screen. "Most of all, I just like these guys and want them to redeem themselves and get their revenge," laughs White. "And however subtle the message may be, I think there is also a nostalgic feel to the heyday of America in our movie, which is treated in the film more aesthetically than any other way. I am trying to make it meaningful and relevant."

Opening across the Philippines on Friday, April 23, The Losers will be distributed worldwide by Warner Bros. Pictures, a Warner Bros. Entertainment Company.