Make it a Date Night with Steve Carell on April 9 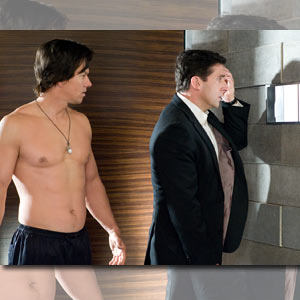 In Date Night, Mark Wahlberg (left) is cast as a criminal who becomes involved in a mix-up with the character of Steve Carell (right). Watch their comic situation in cinemas starting April 9, 2010.

In Date Night, the Fosters couple Phil (Carell) and Claire (Fey) are a suburban New Jersey couple who are stuck in the day-to-day drudgery of family life. When they hear the news that friends are divorcing, they decide to take positive action to reignite the passion in their own relationship and set off on a romantic "date night." They have however failed to make a reservation in a posh Manhattan restaurant.


Discovering that another couple has not turned up for dinner, Claire and Phil Foster decide to take their table and become the Tripplehorns for the evening—never expecting the tumultuous events that are about to unravel. The Tripplehorns are in fact criminals involved in a complicated web of intrigue and what follows is a case of mistaken identity. As the evening progresses, they find themselves in deep trouble. Everything is suddenly at stake: their marriage and even their very lives.

The enormously talented Steve Carell in the following Q&A discusses comedy and the joys of married life.

Q: What appealed to you about the script?

A: "I like the idea of a comedy revolving around a married couple; it is something you do not see very often. Then on top of that, these two develop a greater understanding of each other in the process, so it is both funny and moving and with any luck, it will also be relatable."

Q: Can you talk about the chemistry between you and Tina?

A: "Tina is the one of those people who I believe makes anyone a better actor. She is an incredibly smart person and I think so much of her humor stems from that intelligence. I have admired her for awhile and was very excited to get the chance to work with her. Not only is she funny but she is a really good person too, and that shines through."

Q: What was it like working with Mark Wahlberg?

A: "He was incredibly funny. I had never met him before, and I honestly did not know what to expect because he seems to be a very quiet, introspective person and I think he brought that to the movie. He had a great sense of humor about himself and about the character. I think he has drawn a very amusing and intriguing character for Date Night as being shirtless all throughout."

Q: How do you think people around the world will relate to the film? Is the concept of Date Night international?

A: "Couples all over the world understand the need to have special time with each other. Date Night is a generational thing though, but these days parents are so immersed in their kids' lives. So you tend to lose those special times with your spouse in the midst of life."

Q: Can you talk about your own family; do you take the time for date nights?

A: "We don't have any structured date nights. We truly enjoy staying in a lot when the kids are in bed. Tina and I were talking about this earlier. Sometimes the best part of a date night is just coming home and just being alone together. I think date nights do not necessarily have to involve going out anywhere fancy. I think it is really a matter of connection. The simpler the better is what works for us."

Q: How much are you enjoying the massive success you have experienced over the past few years?

A: "It is great and I think that having it a little older when you have a little more maturity is a good thing because you just take it for what it is. My life is much the same as it was before. It is about my wife and my kids, and that's what is important to me and what defines me as opposed to my work. So becoming more successful has not shifted the focus of my life."

Born in Massachusetts, Steve Carell studied at the Second City Theater Group in Chicago. He is the Golden Globe winning star of the US version of the popular TV show The Office. His film roles include Anchorman: The Legend of Ron Burgundy, Bewitched, Little Miss Sunshine and Dan In Real Life. He starred in "Bruce Almighty" with Jim Carrey and the sequel, "Evan Almighty."


His acclaimed starring film The 40 Year-Old Virgin was nominated for Best Original Screenplay from the Writer's Guild Association which he co-wrote with director Judd Apatow. Carell went on to star in Get Smart opposite Anne Hathaway. He provided the voice for The Mayor of Whoville in the huge animated hit, Horton Hears A Who.