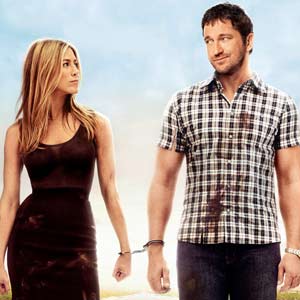 Jennifer Aniston and Gerard Butler narrate the stunts that they had to do for the upcoming action comedy The Bounty Hunter.

Taking his ex to jail makes a bounty hunter's job the most satisfying in the world, in Columbia Pictures' new action comedy The Bounty Hunter starring Jennifer Aniston and Gerard Butler.

In the film, Milo Boyd ( Butler ), a down-on-his-luck bounty hunter, gets his dream job when he is assigned to track down his bail-jumping ex-wife, reporter Nicole Hurley (Aniston). He thinks all that's ahead is an easy payday, but when Nicole gives him the slip so she can chase a lead on a murder cover-up, Milo realizes that nothing ever goes simply with him and Nicole. The exes continually one-up each other—until they find themselves on the run for their lives. They thought their promise to love, honor and obey was tough—staying alive is going to be a whole lot tougher.

Directed by Andy Tennant (who previously gave us the hit comedies Sweet Home Alabama and Hitch), The Bounty Hunter is "not just a romantic comedy," says producer Neal Moritz. "It's an action comedy that has romance in it as well. Andy does all of those things—comedy, romance,
and action—really well."

What attracted Tennant to the project was a script that would prove to be an action-packed story as well as production. "Here was a movie that was so subversive and funny. It's a take-no-prisoners marital comedy," Tennant remarks.

Though The Bounty Hunter has romantic elements, the filmmakers were clear from the very beginning about the movie they would be making—one in which the action elements were as strong as the romantic chemistry between the actors.

With Gerard Butler, an action-movie veteran, as the male lead, it was certain that he would do as many of his own stunts as was feasible. "Everybody associated with the movie gets very nervous when the movie star decides they're gonna jump off the building or they're gonna do those things. But Gerry did."

"I was smashing into people, running up and down stairs, hitting people, climbing ladders, jumping off roofs," says Butler. "I probably did 40 takes where I jump off a roof and smash on the ground and roll over. But it's magical when you see it in the movie."

What was more surprising was that Aniston was just as ready, willing, and able as her co-star. "I've never really done something that had so much action," says Aniston.

Aniston recalls the physical challenges wryly. "I was dumped into a trunk. I ran for miles and miles in four-inch Manolos. I got covered in pond scum. Gun shots, car chases, crashes. It was so much fun!" she deadpans.

Opening soon across the Philippines, The Bounty Hunter is distributed by Columbia Pictures, local office of Sony Pictures Releasing International.