amBisyon 2010 will have a five-part premiere on April 9 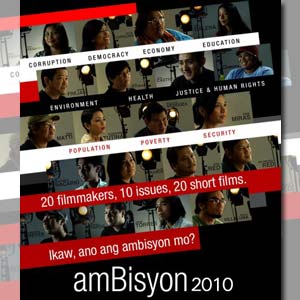 Some of them have box-office hits to their name while others are recognized internationally. These are the independent film directors behind amBisyon2010, a film project launched by ANC, the ABS-CBN News Channel that aims to show the real issues at stake in the 2010 elections.

This Tuesday, April 6, the 20 filmmakers will have their first public appearance together in a much-anticipated red carpet premiere at the Cultural Center of the Philippines' Dream Theater.

The amBisyon2010 train hit a snag recently when the Movie and Television Review and Classification Board gave Jeturian's Ganito tayo ngayon, Paano na tayo bukas? and Mendoza's Ayos Ka, an X rating, which prohibits the films from being shown to the public.

After further deliberation, the MTRCB withdrew the X-rating of Ayos Ka, a music video featuring clashing visuals and lyrics on the state of the country.

The Board upheld its previous decision on Jeturian's piece, which follows a newspaper—featuring a headline on the administration's economic success—from the moment it is delivered to a homeowner to a sequence that shows its usefulness in wiping feces from the foot of a cart-pushing vendor .

This incident has united the 20 filmmakers even more as they defend freedom of expression.

Jade Castro, who has enjoyed both critical and commercial success with films like Endo and My Big Love, said the times call for him to join "amBisyon2010."

"I wanted to be a part of amBisyon kasi I'm a filmmaker who's also a Filipino. And it's my job to tell stories. Gagamitin ko yung alam ko to articulate, to give voice dun sa turmoil sa bansa," he said.

John Torres, whose films have been screened from Rotterdam to Berlin, also saw the project as a way to express himself as a Filipino. "Gustong maghayag ng sariling ambisyon bilang Pilipino in my own terms, in my own language, not necessarily being very overly political about things," he explained.

Renowned documentarist Ditsi Carolino, on the other hand, found it an opportunity to raise awareness on social issues. "I thought that if I could present the farmers' issue, their fight for land, yung Agrarian Reform struggle, and present that in the context of the elections, then that would be something," she said.

Paolo Villaluna, who conceptualized the project with fellow amBisyon2010 director Emman dela Cruz, said he hopes to answer his own questions about the country through this project. "Not only is it (amBisyon2010) supposed to inspire but more importantly, it's supposed to provoke people into thinking again about their future," he explained.

AmBisyon2010 will have a five-part TV premiere on ANC (SkyCable channel 27) and Studio 23 starting April 9.