PEP REVIEW: Babe, I Love You capitalizes on the chemistry of Anne Curtis and Sam Milby 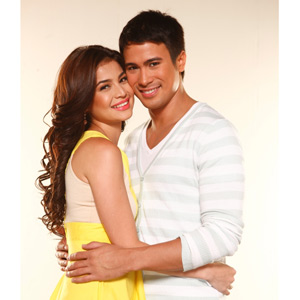 The characters of Anne Curtis and Sam Milby are on opposite ends of the spectrum in Star Cinema's Babe, I Love You. Can their love bridge the gap between their two worlds?

The behemoth manufacturer of modern Filipino fairy tales goes head to head with the behemoth manufacturer of American blockbusters this week in the box office. It's Star Cinema's Babe, I Love You versus Warner Bros.'s Clash of the Titans in the epic battle for a share of the moviegoer's peso. Although Babe, I Love You is at a disadvantage, I'm sure it will put up a good fight against the Titans. Why? Because Filipinos can't get enough of happy endings and they will pick Sam Milby over Sam Worthington any day.

Can love really bring two opposite worlds together? We've been taught since elementary that like poles repel and opposite poles attract, so we should know by now the answer to this question. In this romantic comedy, we get Nico (Sam Milby) on one pole. He is an affluent Architecture professor being groomed to be the next Vice Dean. He has been working hard for this promotion in order to win back the affection of his mom (played by Laurice Guillen) who indirectly blames him for the death of his dad.

Meanwhile, Sasa (Anne Curtis) stands on the other pole. She is the stereotypical promo girl: pretty, poor, soft-witted, and unapologetically bakya. She is a perennial beauty pageant contestant who has never won the crown because she tanks at the Q&A portion. The two initially repel each other in cat-and-dog fashion, but the law of gravity makes their opposite worlds clash into each other.

The first half of the movie is characterized by the Star Cinema's trademark kilig sequences as the two pretend to repel each other in their pseudo-love/hate relationship. But after the first kiss seals the deal, the narrative moves on to tackle a more important theme—accepting your partner's past. Sasa gets pushed into Nico's world where she fits like an oversized glove. She is judged by her skimpy clothes, her lack of a college diploma, and her past.

When Nico finds out that Sasa used to have an affair with his married uncle, he starts to question everything they have. Should Sasa's old ways strain their relationship? Love should not be about one's number of flings or one-night stands. Nor it should be about mistakes that belong to the past. The studio's scribes hit a gold mine with this theme.

The overall picture still lacks the gloss of Paano Na Kaya? or the emotional potency of Miss You Like Crazy, but the stars make up for it. Anne is perfectly cast as the loud-mouthed beauty who wants to redeem herself from her not-so-perfect past. Sam's acting is getting better, although he fumbles on his Tagalog lines. Nevertheless, his undeniable talent puts him on the list of showbiz staples.

Even though they say that they are no longer a couple, Anne and Sam stilll have a connection that translates to palpable onscreen chemistry. And that is probably why some Filipinos will choose Anne and Sam over a bunch of gods power tripping on mortals.


The Star Cinema film Babe, I Love You is currently being screened in cinemas nationwide.