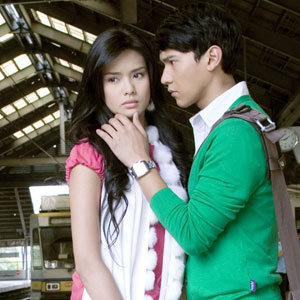 The characters of Erich Gonzales and Enchong Dee hope that true love will straighten out their problems in the indie film Paano Ko Sasabihin? Watch them use sign language in this indie film, which will be screened in SM cinemas starting April 16.

What if the attractive mute guy you meet on the metro train thinks you're also deaf? Are you ready to pretend to be deaf? And what if you were both just pretending so as not to disappoint each other?


This is the situation faced by the characters of Erich Gonzales and Enchong Dee in the 2009 Cinema One entry Paano Ko Sasabihin? See how these two souls become entangled in a loop of lies and how their love for each other helps them surpass their communication problems.

Get to know more about the characters portrayed by Erich and Enchong in this indie film:

EHRYL LIBRANDA (Erich Gonzales) - Ehryl is a gregarious, outgoing and positive 24-year old girl who is a newbie writer for soap operas at TV9. She is the bread winner of the family. Her half brother Wilhem is a deaf-mute and buying an expensive digital hearing aid as birthday gift for him is one of Ehryl's priorities. Ehryl had a recurring dream, a surreal encounter with a gorgeous guy inside the train. As she sees Mike each day, Ehryl assumes he could be the attractive guy in her dreams.

MIKE MAKARAEG (Enchong Dee) - Mike is a 25-year old boy next door and playful assistant art instructor at Malachi School for the Deaf. He is an artist who is able to give his time for deaf children by teaching them the "colors" of the world. Mike's "other side" is his ability to pretend to be deaf in public places. He meets Ehryl, and the roller coaster ride of deceit and lies unfurl between them as they continue their charade for the sake of love.


Paano Ko Sasabihin? (How do I Tell You?)

Written and directed by: Richard Legaspi