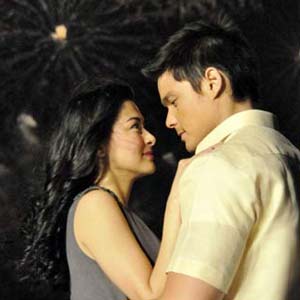 Dingdong Dantes and Marian Rivera will star in You To Me Are Everything, their movie team-up after One True Love (2008). This co-production of GMA Films and Regal Entertainment will open on May 5.

After doing separate projects on TV, Dingdong Dantes and Marian Rivera reignite their chemistry on the big screen for the upcoming movie You To Me Are Everything.


This co-production of GMA Films and Regal Entertainment is scheduled to open in cinemas nationwide by May 5. Directed by Mark Reyes, You To Me Are Everything revolves around the endearing love story of Iska (Marian), a cheerful Igorot from Benguet, and Raphael (Dingdong), a well-off son of a politician.


By some fortuitous turn of events, Iska suddenly inherits millions while Raphael finds himself penniless after his father is convicted for corruption. Their paths cross and Raphael is tapped to become Iska's business manager while Iska, in all her simplicity, serves as a reminder for Raphael to appreciate the beautiful things in his life. As they struggle to adapt to their new status in life, they fall for each other, but their love comes with a price.


The two lead stars of the movie had a press conference last night, April 13, at the Imperial Palace in Quezon City to talk about their latest movie.


How different is their personal and working relationship now compared to their first movie together?


Completing the cast of You To Me Are Everything are Isabel Oli, Roxanne Barcelo, Manilyn Reynes, AJ Dee, Andrea Torres, Bella Padilla, Carlo Gonzalez, Victor Aliwalas, Bobby Andrews and Fabio Ide, along with Jaclyn Jose, Pinky Amador and Chinggoy Alonzo.