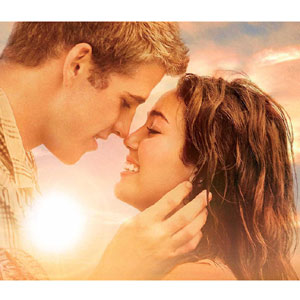 Newcomer Liam Hemsworth will be paired with Miley Cyrus for the upcoming romantic drama The Last Song.

The film is set in a small Southern beach town where an estranged father (Greg Kinnear) gets a chance to spend the summer with his reluctant teenage daughter (Cyrus), who'd rather be home in New York . He tries to reconnect with her through the only thing they have in common—music—in a story of family, friendship, secrets and salvation, along with first loves and second chances.

The Last Song is Sparks ' 15th published book. Though several of his previous titles have been adapted to film, including The Notebook, Message in a Bottle and Nights in Rodanthe, The Last Song is the first to make it to the big screen within the first year of publication. It's also the first for which he has written the screenplay.

For director Julie Anne Robinson, who has earned a trio of BAFTA and Golden Globe® nominations for her work on British television, the film's simple story reflects the writer's profound understanding of human emotions. "It reminds me of classic films like Splendor in the Grass," says Robinson. "The Last Song is about forgiveness and redemption, about people who were once separated being brought together, and it's about love. It's about the fragility of human relationships and also how those fragile bonds, once broken, can be mended."

The film's uplifting themes reflect the author's personal outlook on life. "There are a lot of themes in The Last Song," Sparks says. "You've got faith, forgiveness, family—if you get it just right, these are themes that touch viewers, because they recognize them in their own lives."