J-Lo's The Back-Up Plan will open on April 23 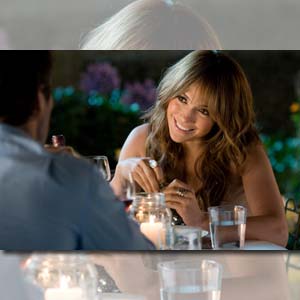 Jennifer Lopez's character does everything in her power to have a baby of her own in the upcoming romantic comedy The Back-Up Plan.

Absent from the silver screen since 2006, Jennifer Lopez now returns to acting with an upbeat, comedic performance in Columbia Pictures' funny love story The Back-Up Plan.

Lopez plays Zoe who, after years of dating, has decided waiting for the right one is taking too long. Determined to become a mother, she commits to a plan, makes a fertility doctor's appointment and decides to do it alone. That same day, Zoe meets Stan (Alex O'Loughlin)--a man with real possibilities. Anyone can fall in love, get married and have a baby but doing it backwards in hyper-drive could be proof positive that they were made for each other.

Producer Todd Black recalls his realization after the filmmakers' first meeting with Lopez that she was the perfect match for Zoe. "She literally embodied Zoe and she completely got the script. She understood the humor involved in this character becoming a new mom, and the humorous and scary nature of her having a new lover in her life at the same time."

"Zoe is very strong, brave and independent," describes Lopez, "but in a very different way than I am, as she didn't grow up with a family like I did. But precisely because I grew up with a lot of love I also need it and rely on more people, whereas Zoe is different. And she is strong enough to make the decision to have kids on her own. I don't think I could do that."

"The script definitely rang true to me, having just gone through my own experience of having babies for the first time," continues Lopez. "All the little jokes about what it is to be pregnant--being tired, insatiably hungry and the hormonal changes. I could really relate."

Lopez's grasp of the material was important but she also had the right chops for a role that requires the ability to play comedy, as well as more tender moments. "Jennifer can convey the perfect amount of emotion and comedy all at the same time," says Black. "She's an all around solid actress. Most times you find an actor who can just do the comedy or just the drama. It's rare to find someone who is strong with both."

Director Alan Poul, who most recently produced and directed such television hits as Swingtown and Six Feet Under, was particularly impressed by Lopez's fearless approach to the physical comedy. "Jennifer has an extraordinary gift; she can go very far with physicality--with slapstick--while still keeping it grounded in the reality of the character."

Opening across the Philippines on April 23, The Back-Up Plan is distributed by Columbia Pictures, local office of Sony Pictures Releasing International.