Nicholas Sparks hits a high note with The Last Song 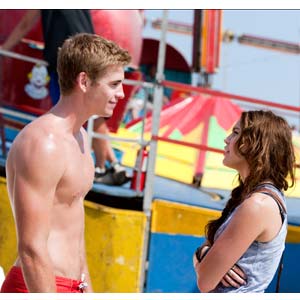 Writer Nicholas Sparks became a literary superstar in 1996 when overwhelming word of mouth made his novel, The Notebook, a publishing phenomenon. Sparks ' inspirational stories about the extraordinary lives and loves of ordinary people have won a worldwide audience, and his latest novel The Last Song, is no exception, debuting at No. 1 on both the New York Times and USA Today best-seller lists.

As Touchstone Pictures brings The Last Song to the big screen starring Miley Cyrus, it marks the beginning of a new chapter in Sparks ' career. The author's 15th published book is also his first screenplay.

At its heart, The Last Song is a poignant journey for a father and daughter who have lost touch with each other and are struggling to find a way back. At the same time, it explores the uncharted territory of young love, as the emotionally closed off Ronnie (Cyrus) begins to let down her guard with a boy she meets during summer vacation.

Greg Kinnear, who plays Steve Miller, Ronnie's father, says Sparks deals with the joy and challenges of maintaining family bonds head on. "I read the script and I was so touched by it," he says. "Nicholas Sparks has an incredible sensitivity towards families. He's written an interesting story about people who at the onset seem to have very little chance of connecting. In the end, not everything is tied up in a perfect bow—which is a lot like real life."

Like his previous work, The Last Song is a love story, says Sparks , "but it's not a romance novel," he cautions. "This is not a dreamy fantasy. It is about real love on a number of levels—the love between a parent and child, young love blooming for the first time, the fondness and caring between mature adults."

Sparks traces the beginnings of The Last Song to a conversation he had with producer Jennifer Gibgot, who was looking for a project that would allow teen star Miley Cyrus to showcase her dramatic abilities. "I had just finished writing The Lucky One," he remembers. "And I was making a decision about what I was going to write next. I try to vary the ages of the characters and their dilemmas to keep the work fresh and interesting for me, as well as for the readers. I'd recently written a couple of novels with characters who were anywhere from 20 to 50 years old, so I was leaning toward writing about a teenage character, which I hadn't done since A Walk to Remember."

As he began formulating his next step, Gibgot called. "She asked if I had anything sitting around that Miley Cyrus might like," Sparks says. "Well, I didn't have anything sitting around. I'm not that prolific. But she told me Miley loved A Walk to Remember, so I really put some thought into it and took five or six weeks to develop this story."

Sparks presented the producers with a fun, yet emotionally driven father-daughter story. "Both the screenplay and the novel were written with Miley very much in mind," he says. "But I write to write a great story and I had to balance those things. The finished product is definitely not a Hannah Montana movie. It's an ensemble piece with a talented cast that will appeal to audiences of all ages. Ronnie is a really compelling female character going through things that a lot of teenagers are going through. She's forced to really grow and mature through the course of the film."

Cyrus was thrilled to tackle her first dramatic role in a film by Nicholas Sparks. She says that A Walk to Remember and The Notebook had a huge impact on her life. "His work has great, positive messages," notes the young actress. "To me, the best thing is that kids love it, but it's also mature enough to appeal to adults. It's unusual to find that kind of balance."