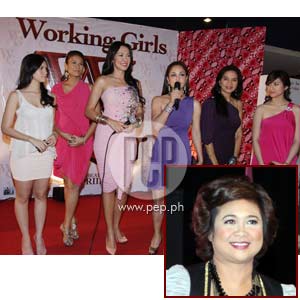 During the 1980s, there were biases against the so-called fairer sex, thus limiting their career choices to secretarial and clerical jobs. Unlike other Bernal classics, Working Girls tackled these socio-political issues in a lighter vein by throwing in humor and sex.

As tempting as the idea may sound, remaking Working Girls isn't necessary. The themes prevailing in the original film are no longer relevant today. Women have already found their rightful place in male-dominated professions, including politics and business. There is a paradigm shift on the role of women in society. They have proven that they can head corporations as ably as they manage their households. So, GMA Films, Viva Films, and Unitel Productions did the next best thing—a sequel.

Director Jose Javier Reyes has done sequels before (Sakal, Sakali, Saklolo), girlie comedies (Pinay Pie), ensemble films (One Night Only), and working girls (Makati Ave.: Office Girls), so it's no surprise that he was picked to pay homage to the 1984 classic. Although four of the original working girls are in this sequel, the spotlight is on the new batch of working girls.

THE PLOT. Eugene Domingo is a mom-entrepreneur, daughter-in-law of Gina's original character, who sells fake bags via her online Multiply store so that her two sons can study in "the Ateneo." When she discovers that her lazy, unsupportive husband (Antonio Aquitania) had an affair, an unlikely romance blossoms between her and her delivery driver (Ricky Davao).

Eula Valdes is a well-known cosmetic surgeon caught in a highly-publicized squabble with Maribel's original character who is now a feminist activist. Think of Vicky Belo versus Liza Maza of Gabriela.

Ruffa Gutierrez is a widow, friend of Carmi's original character, running after her husband's riches. The former beauty queen slash gold-digger finds a glimmer of hope in a failing family business, but her dead husband's daughter (Cherie Gil) stands in her way.

Meanwhile, Bianca King is the bratty daughter of Cherie's character who accepts a job as a segment producer of a news and current affairs program. Despite her diploma from University of California, Berkley, her bitchy co-workers (Mylene Dizon, Andrea del Rosario, and Joey Paras) aren't impressed.

Jennylyn Mercado is a single mother, illegitimate daughter of Rio's original character, who works as a call center agent. She becomes affectionate to her officemate (Carlo Aquino) who is too blind to see her. Apparently, his officemate is going loco over a liberated promo girl (Cristine Reyes) on the prowl for a wealthy lawyer (Rafael Rossell).


Finally, Iza Calzado is a nurse, friend of Jennylyn's character, tasked to take care of the dying wife (Ina Feleo) of the guy who broke her heart (Jao Mapa).

THE VERDICT. In true ensemble film style, the stories of the new characters are interwoven with each other and also with the original cast. But Working Girls 2010 suffers from the same problems that beset One Night Only. Direk Joey stuffs the movie with as many characters and stories as he can, resulting in underdeveloped characters and unresolved conflicts. Did Ina eventually die? What happened to the feud between Eula and Maribel? How did Carlo and Jennylyn end up together? Was Ruffa able to salvage the dying business? These loose threads could have been avoided if Direk Joey's mantra were "quality over quantity" instead of "the more, the merrier."

Meanwhile, the most mature and well-acted segment is Iza's. Her character is torn between duty and choice. Should she offer forgiveness or indifference to the man who broke her heart?

Also, watch out for the brilliant turn of Ina Feleo as she confides her dreams that are shattered by her illness. She once dreamed of pursuing Law and bearing a child, but doing that would be the end of her because of her deteriorating health. She pulls an emotional punch as she delivers the lines: "My heart has been broken so many times keeping my body alive."

As expected, Uge owns the film. Her humorous quips never fail to elicit thunderous laughter from the audience. There are two key scenes you shouldn't miss: (1) the hospital scene where Uge hysterically weeps for her bruised husband only to turn even more hysterical after discovering why he got beaten up; and (2) the "dramatic" goodbye scene, complete with falling rain, slow-mo, and adobong pusit. This talented actress plays her character to maximum comedic effect.

Working Girls 2010 is uneven and undeniably inferior compared to the original, but the ingenuity behind connecting the story of the original working girls with the story of the new batch should not be left unappreciated. But the top reason why you need to see this film comes in two words and 13 letters: EUGENE DOMINGO.