Prince of Persia: The Sands of Time brings life to popular video game 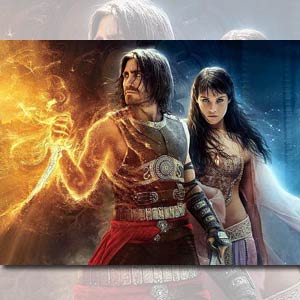 In Prince of Persia: The Sands of Time, Dastan (Jake Gyllenhaal) works with Princess Tamina (Gemma Arterton), in medieval Persia to fight a villain who is trying to destroy the world by stirring up a devastating sandstorm.

Since he already has Harry Potter and the Goblet of Fire to his credit, director Mike Newell knows all about making blockbusters. But even he admits to being impressed by the scale of his latest film, Walt Disney Pictures' Prince of Persia: The Sands of Time.


"There are days I arrive for work and look around me and just think 'Wow!'" says the British-born director. "We had one location where we borrowed half a village and added to it with colossal structures: palaces, public buildings, squares, gardens and secret passageways. It had four sides and the actors galloped around it on horses."

Inspired by the popular video game of the same name, Prince of Persia stars Jake Gyllenhaal as Dastan, a rebellious young prince who's suddenly caught up in a life and death struggle to prevent assorted villains from stealing the Dagger of Time, an ancient and sacred artifact that can reverse history. He works with Princess Tamina (Gemma Arterton) to reach his goal.

Mike Newell talked about the challenges of making the film in the following interview:

Q: What made you decide to be a part of this film?

Mike Newell: I liked the story. It's a classic tale of someone having their world turned upside down by extraordinary circumstances and having to use all their resources to come out the other side. I also loved the idea of going to a place I had never been before. We had the freedom to create this whole amazing world because no one knows exactly what it looked like. The time period is also one when people took stories very seriously, and there wasn't a division between what was a fable and what was real. To me the story of the film feels like one of the great myths: something that's quite simple in a way, but bites very deep and you remember it life-long.

Q: The character of Dastan seems to have been influenced by Indiana Jones...

Newell: Dastan is very athletic and irreverent, which is definitely like Indiana Jones, but my own influences were great stories like Kidnapped and Treasure Island that I read as a child. I loved that you never stepped outside of those stories, that you never for a minute doubted that there really was buried treasure, a desert island and a sailor with a wooden leg,

Q: Was Jake Gyllenhaal your first choice to play Dastan and what was it about him that got him the part?

Newell: You had to have someone of a certain age. He had to have a command of the screen, which Jake obviously does and is partly what makes Jake a very interesting actor. I looked around and Jake was the first name that came into my head. And though I did meet lots and lots of other actors, I kept coming back to him.

Q: You've made many smaller, low budget films among all the Hollywood productions. Are they very different experiences?

Newell: They are but there is something essentially the same on any film, which has to do with concentration and intensity and making sure everything is choreographed right and looks real and satisfying. You should also know that no matter how much money you have to make a film, you never have enough. You always think, if only I could have had more sets, bigger crowd scenes...

Q: Just looking around this location today, you seem to be juggling so many things: hundreds of extras, dozens of horses, extreme heat and some ostriches that aren't cooperating. There was even a sandstorm yesterday. How do you avoid being distracted?

Newell: You are distracted! There's no way round that. You simply have to slot things into different areas of the brain. So the horses are acting up, or the set has fallen down, or the weather's no good, and you file that in the horse bit of the brain or the sandstorm compartment and you think what you're going to do about it, but you don't let it get in the way of working with the actors and filming the important scene. Get that done and then you go back to persuading the ostriches to do what you want.

Q: Whatever the challenges and despite the heat, everyone still seems to be having fun. Is keeping everything relaxed and happy important to you?

Newell: I hate dour atmospheres on set and the director acting like a dictator. I like everyone bouncing around and enjoying themselves. You get a much better result that way and, anyway, that's what this film should be all about. If we've done our jobs well, it should be lots and lots of fun. On that point I have all my fingers crossed.

Opening soon across the Philippines, Prince of Persia: The Sands of Time is distributed by Walt Disney Studios Motion Pictures International.