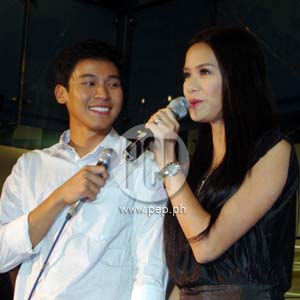 This Cinema One Originals film, Paano Ko Sasabihin, starring Erich Gonzales and Enchong Dee, will be screened until April 27, 2010.

It is easy to presume that director Richard Legaspi's Paano ko Sasabihin, one of the winners in the 2009 Cinema One Originals Film Festival, is yet another commercial teen romance movie. After all, its two lead stars--Erich Gonzales and Enchong Dee--came from the stable of the country's mainstream love team factory. Furthermore, in their movie promos, the pair talked about their "first onscreen kiss" with utmost importance, like it's the movie's central theme.

But alas, the diehard kilig teen movie fans may be left a little disappointed once the cinema lights is turned back on and the end credits roll. Although it won the Audience Award (among others) in the Cinema One Originals digital film festival, there are no playful walk-in-the-park scenes. No chasing games by the beach. There's not even a part where a theme song plays in its entire length while the viewers are shown a montage of the leading man and the leading lady's sweet moments. Instead, we see imperfections, rejection, pretensions and some other complications brought about by love: the belief in it and the desire to have it.

By now, everybody who has a bit of interest on Filipino movies, especially of the flourishing indie and digital variety, must already know the quite interesting and memorable premise of this movie. Paano Ko Sasabihin tells the story of two people caught in a complex web of deception--an ordinary idea, but not when the two people involved are both good-natured and kind hearted.

THE PLOT. Erich Gonzales plays Ehryl, the loving daughter and sister who works hard to earn money to finally buy the hearing aid for her deaf brother. Enchong Dee plays Mike, the educator well loved by his pupils in the school for the deaf where he teaches. Their paths cross, not once, but almost everyday, during their daily commute at the Manila LRT--not one of the most romantic places, especially if you are familiar with how things go in these cramped, sometimes hot, trains.


But Ehryl, a TV soap writer by profession, sees the train as her fairy tale castle, believing that the good looking and charming guy who uses sign language to endearingly talk to a deaf kid on board (making her assume he is deaf), is the mysterious prince in her dreams. So she makes her move. She catches his attention by pretending to be deaf and engaging him in a conversation only a few could understand.

Mike, surprised by the probability that he'd encounter a beautiful deaf girl who has as much sign language skills as he does, is smitten. Naturally thinking that Ehryl is deaf, he also began pretending that he is hearing-impaired, careful not to make her feel different or scare her away (which is also what Ehryl is doing). And so the two gets deeper and deeper into their relationship, falling more and more for each other, while walking on eggshells and living in fear of where the discovery of their respective lies might lead to. But being naturally good people, their dilemma is how to come clean about their secrets without making that something special that they built, crumbling back to the ground.

THE VERDICT. The movie has a sincere intention of a telling a relevant and contemporary love story though the narrative and the visuals. It is fast paced, and yet it builds the story up carefully, to establish the difficulty in the characters' confessions. This build-up is supported by the supporting characters' own stories--most notable is the story of Ehryl's deaf brother, whose rejection by the girl he loves leads to tragedy.

The film romanticized the metro and its landmarks, without being silly and unrealistic. The locations and its artistic representation helped the movie greatly, because although fresh and novel, the storyline could be too lightweight for a full-length feature film, and the visuals made a difference. Without the efforts put into making the scenes artistic and cinema-ready, this movie could simply feel like a very long episode of an afternoon TV love story series. (Again, those familiar with the LRT scene will appreciate how the director efficiently used the location--directing not only Erich and Enchong, but also the other passengers, and most importantly one of the movie's most important "characters:" the train itself).

Erich as Ehryl lights up the screen so well, that part of the beauty of the otherwise drab Manila backdrop can be credited to her presence. A reality search winner via ABS-CBN's Star Circle National Teen Quest, she displays believability as the independent daughter, the empathic sister and the love struck Manila girl. However, she doesn't quite nail the part of a mature and serious writer.


Enchong as Mike demonstrates his sincerity and vulnerability as the hero to his deaf pupils, a strong contrast to his athletic and teen heartthrob image. The pair interacts naturally, thanks to the script free from annoying and corny lines typical of "love team launching movies." But one of the memorable scenes of the movie is the part where the two "talk" over dinner in silence, Erich and Enchong successfully convey emotions without saying a word.

If there's one letdown in this movie, it is that it has built up the story well, that you're left to expect much from the scene where they finally admit the truth. The very crucial moments lacks drama and excitement. The actors aren't at their best in the scenes where everything they've got as performers is needed the most.

But as light as the movie's theme is, it still encourages viewers to be not just spectators of the pair's romance but also be involved in their dilemma. There are questions worth discussing like, who deceived who? Which of them deserved to feel hurt and misled? If I were in his or her shoes, would I have done the same? These questions are not easily answered by the movie's end, but these make Paano ko Sasabihin? clever, rich, out of the ordinary and respectful of the viewers' role in the love story's development.