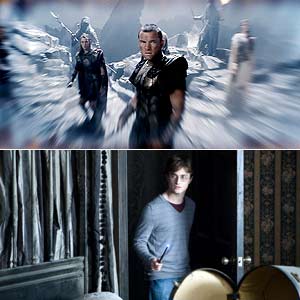 Clash of the Titans (top frame) reached the P200-million mark after three weeks in the box-office. Warner Bros. will soon premiere Harry Potter: The Deathly Hallows, Part 1 in Philippine cinemas.

MANILA, April 26—Clash of the Titans solidified its blockbuster status in Philippine box-office as it reached the milestone P200-mark last April 25 after only three weeks, becoming the year's most successful film to date. This was announced today by Francis Soliven, general manager of Warner Bros. (F.E.), Inc. which distributed the film.

Clash attained the milestone Sunday when it posted a cumulative gross of P201.58 million. The film's sensational run propelled Warner Bros.' year-to-date earnings to reach P515.89 million, which is quite impressive since its only four months into 2010.

"This is the first time in local history that a film distributor conquered the P500-million mark in under four months," claims Soliven.

The general manager of Warner Bros. believes that the rest of the year looks even brighter since highly anticipated movies are still to open. "As the saying goes, 'The best is yet to come,'" says Soliven. "As it stands, we hope to breach the P1-billion mark before the year's fourth quarter because of our strong line-up."

Still to come from Warner are the horror-thriller A Nightmare on Elm Street, the sequel Sex and the City 2, the comic book adaptation Jonah Hex, the mind-bending thriller Inception starring Leonardo DiCaprio, the comedy adventure Cats & Dogs 2, the 3D adventure Legends of the Guardians, the comedy Due Date starring Robert Downey, Jr. and second-to-the-last installment of the enduring Harry Potter franchise, The Deathly Hallows, Part 1.

From Fox (which Warner sub-distributes), the upcoming potential hits are the film adaptation of the TV classic The A-Team, the Tom Cruise-starrer Knight & Day, the Robert Rodriguez-directed actioner Predators, Oliver Stone's sequel Wall Street: Money Never Sleeps, the action-thriller Unstoppable and the fantasy adventure The Chronicles of Narnia: Voyage of the Dawn Treader.